Irons in the Fire 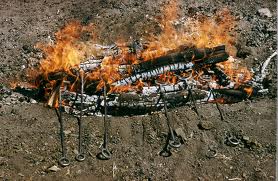 Do you ever feel like you have too many irons in the fire?

I've heard the phrase a million times, but looking at this picture, I'm wondering how this phrase came to mean what I understand it to mean ... too much of too many different things to do!

So, I googled it, and while many answers popped up, here's the one I liked best:

"One reference says it has to do with the blacksmith trade. A skilled blacksmith has "a well-trained apprentice who maintains such control of the bellows and the placement of the irons that each is ready in turn at the anvil and hammer ...'Too many irons in the fire' would mark an inefficient smith or one with an unskilled apprentice. Figurative use of either saying takes us back only to the middle of the sixteenth century." From "2107 Curious Word Origins, Sayings & Expressions from White Elephants to a Song and Dance" by Charles Earle Funk (Galahad Book, New York, 1993)."
from: http://www.phrases.org.uk/ 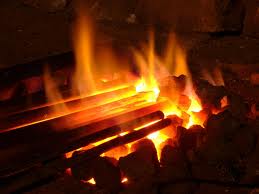 So, from the quote above: "each is ready in turn at the anvil and hammer" ... I interpret this to mean that if we have too many irons in the fire (aka too many jobs or tasks at hand) then we won't be able to properly finish each job/task when it nears completion.

My problem is ... I love SO many things and want to help so many people ... I have a hard time limiting what tasks I take on. But, right now I feel like I have too many jobs (ways of earning money), tasks (chores around the house, responsibilities outside of the house), and hobbies (the way I spend my limited leisure time).

So, what do I eliminate? I suppose a priority list is required first. What are my most important goals? Because if the less important items interfere with the polishing and finishing of a major goal ... then that clearly is a sign of an "unskilled apprentice."

You'd think at my age, I wouldn't still be an apprentice. ha.

Do you have too many irons in your fire? If not, how do you find proper balance? If yes, what do you plan to do about it?