We had a blast exploring Rexburg on Monday. And here's a couple of things we thought were super COOL ... 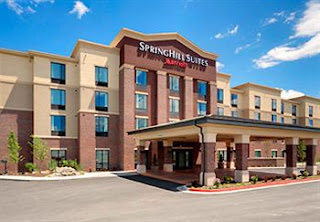 The lobby is crazy: 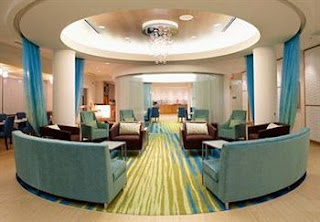 The rooms are crazy COOL:

They had a great salad bar, pasta bar, and pizza buffet. The pizzas were fresh and delicious, and they had a huge variety to choose from. My husband's favorite was the Alfredo pizza; mine was the Ranch pizza; my son loved the pasta bar. Uh. Yum. 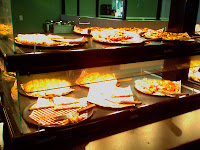 Oh sure ... there are other cool things about Rexburg, like BYU-Idaho campus, the LDS Temple, and the three (seriously - - only three) Redbox locations.

But, what's NOT COOL about Rexburg? The Rexburg Walmart. YIKES!! Just. Don't. Go. There.

Tuesday, we decided (spur of the moment thing) to go to Yellowstone. Unprepared. No camera. No suncreen. Hmm. But we had a GREAT time. Saw tons of wildlife. Saw tons of crazy people jumping out of their cars in the middle of the road so they could get a closer picture of the noisy bear. Great idea. For so many reasons. Also saw people dipping their fingers into the hot water, right next to the sign that said, "Do not touch water. Dangerous. Boiling."