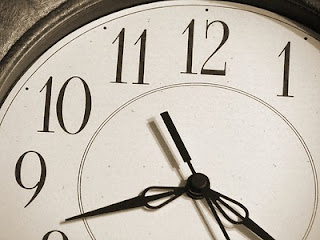 According to the always insightful Wikipedia:

Parkinson's Law is the adage first articulated by Cyril Northcote Parkinson as the first sentence of a humorous essay published in The Economist in 1955:

“ Work expands so as to fill the time available for its completion. ”


It was later reprinted together with other essays in the book Parkinson's Law: The Pursuit of Progress (London, John Murray, 1958). He derived the dictum from his extensive experience in the British Civil Service.

I believe it is true!!

Often times when I feel overwhelmed by my to-do list, I will set the timer on the stove for 30 minutes, and I will attack the first item on my list. Then, when the timer goes off - - whether I've accomplished the current item or not - - I will move on to the next time on my list and reset the timer. And so on. When I do this, I accomplish so MUCH more in my day than when I casually move from one item to the next on my list. And, even if I don't finish each item on the list, I know that I made a huge dent in it during those thirty minutes.


What time management tricks help you during a  busy day or week?