Tips for Writers, Sort of ... by Deborah Coonts

I'm thrilled to have a guest post today, by Deborah Coonts! 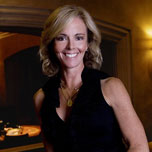 Deborah Coonts, author of Lucky Stiff, says her mother tells her she was born in Texas a very long time ago, though she's not totally sure -- her mother can't be trusted. But she was definitely raised in Texas on barbeque, Mexican food and beer. She currently resides in Las Vegas, where family and friends tell her she can't get into too much trouble. Silly people. Coonts has built her own business, practiced law, flown airplanes, written a humor column for a national magazine, and survived a teenager. She is the author of the Lucky O'Toole Las Vegas adventure series.

Her first book, Wanna Get Lucky? was released in 2010.


Tips for Writers, Sort Of

Which is probably not a bad thing when it comes to writing. Writing is art -- a word-picture born in self-expression. And, as a creative endeavor, there is a bit of coloring outside the lines necessary to distinguish your story, to capture attention.

This sounded so perfect for a story-lover with an authority issue . . . namely me.

With the misplaced confidence of someone ignorant of the concept to terminal velocity, I stepped out on the fiction tightrope with no instruction, no one to grab me if I put a foot wrong, no net to save a bruised ego if I plunged headlong into the chasm.

And I was doing so well, at first. Then I ran into a blank white page with the two most feared words in the writing world: Chapter One. Two words into my masterpiece and I'd crashed to the ground, bloodied and broken. The one thing that was abundantly clear was that I hadn't clue as to how to tackle a project a large as a novel. Where to begin?

So I turned to the world's ringmaster -- Google. They they choreograph the information of our lives like a dance of Elephants, so they surely they could focus a spotlight on my little ring in the circus?

And shine a light they did. I had no idea the wealth of "dos and don'ts" (I refuse to call them rules), tips, guidelines, ways, points, dangers, signs, and fundamentals. While I clung firmly to the trapeze of "writing is art," I quickly realized that if you swing to far on that trapeze, you're going to miss the hand-off guy . . . namely, readers. They have expectations that we as writers must acknowledge. Stories must be accessible, engrossing, entertaining, and readable. That's all well-and-good, but I needed specifics. I didn't even know what to write, much less how.

Best place to start seemed to be with the what. Back to Google.

The first suggestion was: "write what you know." At the time, the sum total of my knowledge came from being a harried single mom and depreciated tax lawyer. My life didn't even entertain me.

The next suggestion, "write what you read." Okay, I could get my head around that. Romantic suspense was my drug of choice. Watch out Sandra Brown. Fingers flying, I burned up the computer, along with the midnight oil. When the light dawned, and I came out of my writing-induced coma, I had learned one thing: I was definitely not Sandra Brown.

With two strikes against me, I braced for the next pitch. "Write what you can imagine." I was in business. I'd spent my life wandering with my head in the clouds -- I could imagine almost anything. Synapses fired and I imagined an overworked young woman who was Head of Customer Relations at a large Vegas Strip hotel with a former hooker as a mother, an absent father, and Vegas's foremost Female Impersonator as a best friend who wanted to be more. It became Wanna Get Lucky?, my first published novel.

I picked up my own "rules" for writing a novel along the way. Some of them might be of interest even if you don't do rules.

RULE ONE: PACK YOUR BAGS

Stuff all your meetings, to-do lists, commitments, and hobnobbing in a trunk and send it packing. Writing is a turbulent journey taken solo with only a small carry-on allowed. You can put the "have-tos" in that carry-on -- like checking in on the kids every week or so, spending enough time with your spouse/significant other that he/she still remembers your name, and talking to friends often enough they don't call Missing Persons. Make time to play with words and zealously guard that time. Your dreams are worth it.

Since language is the skeleton of storytelling, learn the basics -- sentence structure, active versus passive voice, showing not telling, etc. Find a teacher, class, or workshop to learn how to communicate. Then when you're able to make those first steps, don't ask anyone where to go. Imagine.

What happens in every thriller flick when the driver gets in and looks in the rearview mirror? Struggle, choke, death. Your internal editor is that bad-guy lurking in the backseat ready to slit your throat. Do let him get in the car. Instead, put the pedal to the metal and leave that self-edit strangler with a mouthful of dust.

And those lingering doubts about your ability? They are sketchy hitchhikers jonesing to break your stride. Shift, pass, and don't look back.

Surround yourself with other writers (NOT family -- they can't be trusted). Take energy from the camaraderie. Get input -- but use only what you consider valid. Trust your gut. It's your story. Remember, opinions may not be offered with the best of intentions.

Get words on paper. Lots of them. I don't care if it's from a plane, train, hotel, locker room, unemployment line, breakdown lane, edge of a cliff; just write.

Remember, quit is a four-letter word.