From Ali Guthy, A Thriver's Guide to NMO and Other Challenges
By Victoria Jackson and Ali Guthy,
Authors of Saving Each Other: A Mystery Illness, A Search for the Cure, A Mother-Daughter Love Story 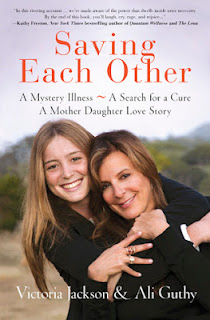 Yes, it's true. The 2% deal of the cards is not always fair, especially when it comes to being given a rare orphan disease. But as I learned, those same low odds can be overturned. How? Well, the following five steps have certainly worked for me and for others who've given them a try. Hopefully they'll provide you with a starting place, if not a roadmap to thriving, to how you might create your own map. The steps are: (1) Discovery, (2) Throw a Fit, (3) (In the words of my mom) "Put on Your Makeup and Get Out There!") (4) Don't Be a Victim, and (5) Remember: The Sun Will Come Out Tomorrow!

Know what you have! Ignorance can be bliss, but it's also a means of avoiding the situation. Take your time, but confront your enemy, face the music, and then, in your own way, learn how to deal with the facts presented.

Don't bottle your feelings, but don't allow them to take over your life. Stick to a normal routine, but allow yourself to balance that normalcy with the realities of your unusual/unique circumstances. When someone says or does something that's insensitive -- even if it's the most minute comment -- if it makes you feel upset, be upset! Allow yourself to have bursts of anger or fits of depression, as long as those moments don't start to encroach upon or ruin your normal life.

Don't let the reality of your situation or the every-so-often fits of depression stop you from living. Lead a normal life and pursue activities or goals that are both enjoyable and alleviate you from the stress, anger, and confusion that surround your health challenges.

Self-pity, self-judgment, and all other forms of internalizing a diagnosis like NMO are not the answer. Don't be the helpless Cinderella waiting for the magical Prince Charming (commonly known as the cure) to come sweep you off your feet. As much as it pains me to say it, in the realm of NMO and other dire diagnoses, there is no time for the magic of fairy tales. You can't indulge in if only thinking anymore than you should allow for what if thinking. Don't be a patient; be an advocate. Be your own Prince Charming, and be a part of the search for the cure. Donate blood to the repository or be part of research efforts, talk to your doctors and other patients, and spread the word about NMO or other little-understood diseases by educating those around you.

STEP 5: REMEMBER:
THE SUN WILL COME OUT TOMORROW

Stay positive! Always try to find the silver lining. I know, sometimes it just doesn't want to be found. If you can remember that everything you are going through is going to empower others to overcome their odds, that might help you remember that you are being part of the solution­ -- and that's a very powerful force to be.


The above is an excerpt from the book Saving Each Other: A Mystery Illness, A Search for the Cure, A Mother-Daughter Love Story by Victoria Jackson and Ali Guthy. The above excerpt is a digitally scanned reproduction of text from print. Although this excerpt has been proofread, occasional errors may appear due to the scanning process. Please refer to the finished book for accuracy.

Copyright © 2012 Victoria Jackson and Ali Guthy, authors of Saving Each Other: A Mystery Illness, A Search for the Cure, A Mother-Daughter Love Story

Author Bios
Having achieved success as a Hollywood makeup artist, cosmetics entrepreneur and television infomercial pioneer, Victoria Jackson prefers to think of herself as "a goodwill ambassador for makeup."

A recognized trailblazer in the infomercial industry, Jackson altered a global beauty aesthetic with her "no makeup makeup" -- a foundation that was the cornerstone of her eponymous line Victoria Jackson Cosmetics, which has enjoyed over a half billion dollars in sales, and continues to grow.

Jackson has also garnered a devoted following through her two briskly selling books: Redefining Beauty: Discovering Your Individual Beauty, Enhancing Your Self-Esteem and Make Up Your Life: Every Woman's Guide to the Power of Makeup, a deeply personal account of her experiences in business.

Today, Victoria's primary focus is the Guthy-Jackson Charitable Foundation, which is dedicated to funding biomedical research in the search to understand the pathophysiology and biochemistry of Neuromyeltis Optica (NMO) Spectrum Disease. It is her greatest hope that "together we will reverse the effects of NMO and eventually cure this disease."

Married to husband Bill Guthy of infomercial giant Guthy-Renker, Victoria Jackson is the mother of three children and together they reside in Los Angeles.

Ali Guthy, a student at the University of California, Santa Barbara, has kept a journal since she was a young girl. At The Buckley School in Los Angeles, she served as co-editor-in-chief for her high school's award-winning newspaper, The Student Voice. She is also the managing editor of The Spectrum, the newsletter she created with the Guthy-Jackson Charitable Foundation. While at Buckley, she had record-setting achievements on the tennis court, finishing with an overall winning record of 165-22. Ali also received Buckley's coveted Head of School Award -- given to a student who demonstrated leadership, academic achievement, character, and service on behalf of the school and community. Ali has also been honored with numerous awards and in the media for giving a public face to NMO and for her leadership in reaching out to newly diagnosed patients and their families.

A note from Margo: As a parent of a child with a chronic disease and other children who've suffered traumas, I was interested to read this book. Check back next week for my review of the content.
...

What are you reading right now?

Email ThisBlogThis!Share to TwitterShare to FacebookShare to Pinterest
Labels: books