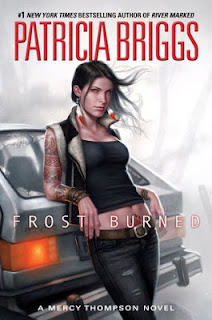 I love this series! But this book fell short.

Here are the two reasons I could not give this book five stars:

1. It's plot is dependent upon an "Alpha & Omega" book titled FAIR GAME. What if you haven't read the other series? Up until now the two series have stood alone. They've shared a few characters, but their plots have never relied upon each other. Luckily, for me, I read FAIR GAME first, and so FROST BURNED made complete sense to me, and I felt like it picked up right where the other book left off. However, a friend of mine and my daughter had not read the other series, and neither of them liked this book. How could they? Details were missing. And, I won't let my daughter (teenager) read the other series, because there is too much sex in the other series. This series is much cleaner.

2. The ending. I won't spoil anything for you, but I felt the "reasoning" behind the whole plot was ridiculous. It came out of left field, and took the author pages of "telling" to explain why the certain people were behind it all. Nope. It didn't fit for me. The ending is such a tricky thing. It has to wrap everything up in a finished package, and this time Briggs fell short. But don't worry, I'll still buy your next book! Because I love Mercy Thompson! :)

To read more of my book reviews, friend me on Goodreads.com !! :)