It’s important to note that while honey is natural substance and considered safe for consumption, it should never be given to a child under one year old. Infants have not yet developed the immunities necessary to defend against the spores of the botulism bacteria that are found in soil and can sometimes make their way into honey. (1) 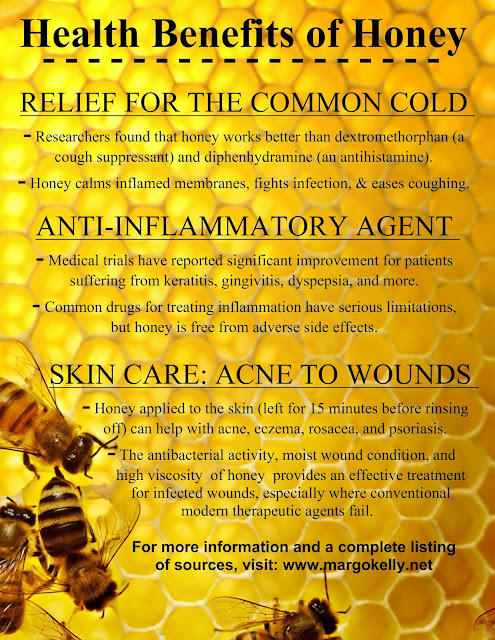 “The medicinal importance of honey has been documented in the world's oldest medical literatures, and since the ancient times, it has been known to possess antimicrobial property as well as wound-healing activity.” The first written reference to this sweet, thick fluid produced by bees was on a Sumerian tablet, dating back to 2100 BC. The writing mentioned that honey was used as a drug and an ointment. Around 350 BC, Aristotle discussed different types of honeys, referring to pale honey as being “good as a salve for sore eyes and wounds.” (2)


I’m always on the lookout for natural remedies to physical ailments, and I’m excited to share with you what I’ve learned about honey. Now, keep in mind, there are a lot of anecdotes, misnomers, and bits of folklore out there floating around on the internet about honey. Some are true. Some are not. Today, I will share with you a few proven health benefits.

Honey is a:
1) Relief for the Common Cold
2) Anti-inflammatory Agent
3) Skin Care Treatment – everything from acne to chronic wounds


Honey is a Relief for the Common Cold
My dear sweet grandmother was the first to introduce me to the benefits of honey. If she ever heard me cough or sneeze, she’d make me a concoction of vinegar and honey. One tablespoon of apple cider vinegar, one tablespoon of honey, mixed together with warm water. It tasted awful, but it worked. When I complained of the taste, she said I could just have the honey if I preferred, because it would still soothe my throat and ease my cough.


My grandmother was right, and modern research proves it.
Multiple studies, one of which was conducted at Penn State college of Medicine, have shown that honey works better than a cough suppressant called dextromethorphan and an antihistamine called diphenhydramine. (1) & (3)


Honey is an Anti-inflammatory Agent
A few months ago, when a massage therapist saw my inflamed toe joint, she told me to start taking a tablespoon of raw organic honey every day. She said it had anti-inflammatory properties. I doubted her advice. So I researched it, and I found plenty of support for her claims. As a result, I started a daily regimen of honey and the swelling in the joint went down within a week.


Multiple medical trials have been conducted using honey as an anti-inflammatory agent. More than 85% of patients who had keratitis (inflammation of the cornea) reported improvement. A significant reduction in the bleeding sites of gingivitis patients was reported in another study. And 66% of patients with dyspepsia (inflammation of the stomach) became symptom free after three months and another 16% had their symptoms relieved. (4)
Tahereh Eteraf-Oskouei at the Biotechnology Research Center, Tabriz University of Medical Sciences, in Iran, states, “Drugs for treating inflammation have serious limitations: corticosteroids suppress tissue growth and suppress the immune response, and the non-steroidal anti-inflammatory drugs are harmful to cells, especially in the stomach. But honey has an anti-inflammatory action free from adverse side effects.” (5)


Additionally, honey’s anti-inflammatory properties help calm eczema, rosacea, and psoriasis prone skin. Apply raw honey to area and let sit for about 15 minutes then rinse off. (5) & (6)
Honey is a Skin Care Treatment – Everything from Acne to Chronic Wounds
"Honey’s antibacterial properties make it an excellent cleanser for acne. Rub some on the affected area and let sit for 10-15 minutes then rinse off." (6)


There are many varieties of honey, but typically the darker the color the better its antibacterial properties. (1)
There’s even a specific type of honey made in New Zealand, called Manuka honey that is known worldwide for its exceptional healing properties. (1) & (2) According to US News Report, your doctor can even get you a prescription for a wound dressing infused with this honey. (3) Wound care specialist, Dr. Frank Bongiorno, said, “It is Manuka honey's pH content, which leans toward acidic, that helps the healing process.” (1)


According to an article in the Asian Pacific Journal of Tropical Biomedicine: The antibacterial activity, moist wound condition, and high viscosity of honey offer an effective treatment for infected wounds. This ancient remedy "has recently been ‘rediscovered’ by the medical profession, particularly where conventional modern therapeutic agents fail." Furthermore, "Manuka honey has been reported to exhibit antimicrobial activity against pathogenic bacteria such as Staphylococcus aureus (S. aureus) and Helicobacter pylori (H. pylori) making this honey a promising functional food for the treatment of wounds ... burns, skin ulcers, and ... skin grafts." (2)

In conclusion, this post is not meant to serve as a formal research paper. It is meant to share information. The health benefits of honey are extensive, and I’ve only listed a few of the proven benefits with you here today.


Honey is a relief for the common cold, an anti-inflammatory agent, and a skin care treatment–everything from acne to chronic wounds.


What do you think? Do you use honey for more than just sweetening your tea?