#BookReview - IF I RUN by Terri Blackstock

This was the first book I've read by author Terri Blackstock. For my full review - scroll on down to the bottom of this post. 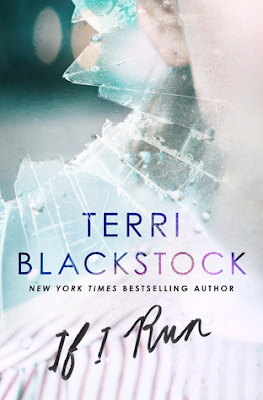 Description
Casey knows the truth. But it won't set her free.
Casey Cox's DNA is all over the crime scene. There's no use talking to police; they have failed her abysmally before. She has to flee before she's arrested . . . or worse. The truth doesn't matter anymore. But what is the truth? That's the question haunting Dylan Roberts, the war-weary veteran hired to find Casey. PTSD has marked him damaged goods, but bringing Casey back can redeem him. Though the crime scene seems to tell the whole story, details of the murder aren't adding up. Casey Cox doesn't fit the profile of a killer. But are Dylan's skewed perceptions keeping him from being objective? If she isn't guilty, why did she run? Unraveling her past and the evidence that condemns her will take more time than he has, but as Dylan's damaged soul intersects with hers, he is faced with two choices. The girl who occupies his every thought is a psychopathic killer . . . or a selfless hero. And the truth could be the most deadly weapon yet.

Author Bio
Terri Blackstock, author of If I Run, has sold over seven million books worldwide and is a New York Times bestselling author. She is the award-winning author of Intervention, Vicious Cycle, and Downfall, as well as such series as Cape Refuge, Newpointe 911, the SunCoast Chronicles, and the Restoration Series. For more information please visit http://www.terriblackstock.com and follow the author on Facebook and Twitter

My Review
(I received an advance reader's copy of this book for free in exchange for an honest review.)

Normally, when I open a book and discover it's written in first person, present tense, I cringe. I have a hard time settling into the writing. However, Terri Blackstock did a great job, and I was able to enjoy the story regardless of the point of view and tense.

While I am a religious person, I do not seek out "Christian" fiction, and honestly, if I'd known this was Christian fiction, I might not have agreed to read it ... because often times well-intentioned authors end up preaching with a finger pointed in the reader's face. I was thrilled that this was not the case with IF I RUN. However, after the story had ended, the author wrote an additional section (which had nothing to do with the story), and it felt quite awkward to read. So - if you're bothered by preaching, just don't read the "A Note From The Author" at the back of the book.

For the most part, I thoroughly enjoyed IF I RUN, but I was disappointed there was no resolution. The book just ended. I also wished certain plot elements were more developed. As it was, the side story of the missing girl was too hard to believe, because too many elements conveniently fell into place.

Here are a couple of snippets from the book that I enjoyed:

Just after she's cut and colored her hair, the main character has this great moment of reflection: "I go back to the toilet and flush again, then stand for a moment watching the old Casey swirl around the bottom of the bowl before disappearing down the hole." (page 6 of the Advance Reader's Copy)

"I feel like Dylan has read some journal that I haven't even written. How does he know those things about me? Facts are one thing, but truth goes deeper. It cuts to the heart." (page 249 of the Advance Reader's Copy)

And in case it matters to you, there's no sex, foul language, or extreme violence in the book.

If you're a fan of mysteries or Christian fiction, you'll probably enjoy this book - but be warned that it's the first in the series, and there's no resolution at the end of this first book.

Email ThisBlogThis!Share to TwitterShare to FacebookShare to Pinterest
Labels: book reviews, IF I RUN, Terri Blackstock