As a writer, I spend a great deal of time researching various topics. For my novel, UNLOCKED, I extensively researched hypnosis. Feel free to join the conversation in the comments, because I find this topic highly fascinating!

According to the Mayo Clinic:
Hypnosis “is a trance-like state in which you have heightened focus and concentration. Hypnosis is usually done with the help of a therapist using verbal repetition and mental images. When you're under hypnosis, you usually feel calm and relaxed, and are more open to suggestions.”

According to Merriam-Webster:
“hypnosis: a trancelike state that resembles sleep but is induced by a person whose suggestions are readily accepted by the subject”

These definitions seem pretty tame, but I’d like to suggest that not all hypnosis is safe.

Actually, let me be perfectly clear: I am not an advocate for hypnosis.

I believe not all hypnosis is safe for two reasons: 1) the vulnerability of the participant and 2) the ethical code of the hypnotist.

If you answer yes to any of the following questions, please share your experiences in the comments below:

While it is possible to have a positive experience with hypnosis, I encourage caution, because not all hypnosis is safe.

Vulnerability of the Participant

First, let me address the vulnerability of the participant. Typically, in order to be hypnotized, the participant must be willing. However, sometimes, he or she is overly willing and eager to escape the realities of life. Wanting to detach from the real world can become dangerous.

According to Mary Garden in an article she wrote for The Humanist in 2007, “Dr. Solomon Snyder, head of neuroscience at Johns Hopkins University, warns that … the brain releases serotonin. This may help those with mild depression but too much serotonin can cause, in some, a paradoxical relaxation-induced anxiety. Instead of relaxing … these people become distressed and may even have panic attacks. … some cases can launch a person straight into psychosis.” *

According to Mayo Clinic, adverse reactions to hypnosis may include: headache, dizziness, anxiety, distress, creation of false memories. They also advise, “Use special caution before using hypnosis for age regression to help you relive earlier events in your life. This practice remains controversial and has limited scientific evidence to support its use.”

Depending upon the vulnerability of the participant, a wide range of negative reactions is possible, everything from a headache to psychosis.

Ethical Code of the Hypnotist

Second, not all hypnosis is safe because of the ethical code of the hypnotist involved.

When I was in college, I had the opportunity to attend a hypnotism show. In an auditorium along with a couple hundred other students, we watched as approximately fifteen students went on stage and very willingly participated in the hypnosis. We all laughed and enjoyed the show as the hypnotized students on stage did silly things such as quacking like a duck or singing a song. It was great. Terrific. Until the end. While the participants were still hypnotized, the hypnotist turned to the audience and spouted his political views. Then he actually instructed everyone how to vote in the upcoming election. I was shocked. I was not hypnotized, and I was not in a suggestive state, but all of those students still on stage were under hypnosis, and I’m certain there were plenty of other students sitting in the audience who were in some stage of suggestibility from watching the hypnosis being performed.

That’s the exact moment when I decided I did not like hypnosis, and I would never be hypnotized.

Now, you might be thinking: that’s merely an anecdote and an isolated incident. Maybe. However, in my research, I found many of these types of stories.

I also found the transcript of a presentation given by Dr. Charles Tart at a psychology convention where he casually stated to the audience, “Being a hypnotist … You can bend men's wills and change their reality and even give them good experiences and that's really an ego trip. A number of charlatans come into hypnosis, of course, because of that. They're not really interested in these intangible goals of helping people … They're more on a pure power trip … And then you always have stage demonstrations where the beautiful girl does strange things and the shy boy from town gets up and sings like Elvis Presley. It makes great entertainment. You all laugh and then you think, "Would I want to be hypnotized? I don't know. It's great to see it happen to other people." And then, of course, we have the classic thing of Svengali and Trilby, the master hypnotist who seduces the innocent young girl. I actually don't know how effective hypnosis is in seducing people. It if does work, those people don't write it up for the journals! It's kind of hard to get objective data on that sort of thing. I'm sure it does work sometimes because, let's face it … there're a lot of girls who'd like to say, "Oh, no. I would never do a thing like that, but he overpowered my will and it wasn't my fault at all."”

That was said by a man who is considered an expert in the field, whose publications are used in modern psychology.

So where does that leave us? Am I telling you to never participate in hypnosis because it’s evil? No. That’s not what I’m saying.

I am simply asking you to be cautious when considering hypnosis.

First, be honest about your own vulnerabilities. Why do you want to be hypnotized? Are you bored and simply looking for entertainment? Are you trying to escape your own personal reality? Are you looking for answers that can be found via other avenues?

Second, if you choose to participate in hypnosis, please take the time to research the ethical code of the hypnotist you plan to use. 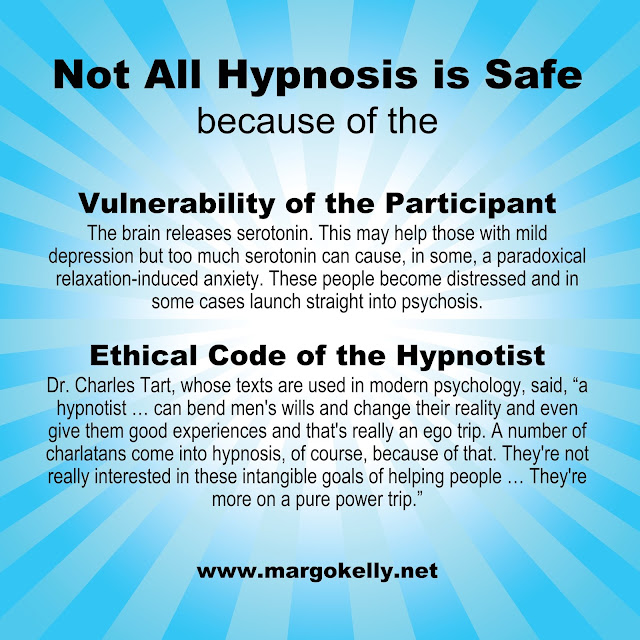 Join the conversation in the comments. What are your viewpoints on hypnosis? Have you ever been hypnotized?

Sources:
http://www.mayoclinic.org/tests-procedures/hypnosis/basics/definition/prc-20019177
http://www.merriam-webster.com/dictionary/hypnosis
http://thehumanist.com/magazine/september-october-2007/features/can-meditation-be-bad-for-you
* While this article written by Mary Garden for The Humanist is about meditation, there are significant parallels between meditation and hypnosis, which I will present in a subsequent post.
http://www.mayoclinic.org/tests-procedures/hypnosis/basics/risks/prc-20019177
http://www.atpweb.org/jtparchive/trps-02-70-01-027.pdf