As a huge Dean Koontz fan, I was thrilled when given the opportunity to review his latest book in the Jane Hawk series. Scroll down for my complete review. 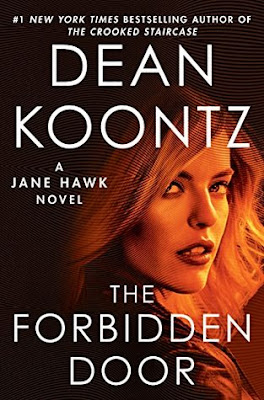 Description from the Publisher:
When this relentless rogue FBI agent comes knocking, her adversaries will have to answer—with their lives—in the latest thrilling Jane Hawk novel by the #1 New York Times bestselling author of The Silent Corner.

“We’re rewriting the play, and the play is this country, the world, the future. We break Jane’s heart, we’ll also break her will.”

She was one of the FBI’s top agents until she became the nation’s most-wanted fugitive. Now Jane Hawk may be all that stands between a free nation and its enslavement by a powerful secret society’s terrifying mind-control technology. She couldn’t save her husband, or the others whose lives have been destroyed, but equipped with superior tactical and survival skills—and the fury born of a broken heart and a hunger for justice—Jane has struck major blows against the insidious cabal.

But Jane’s enemies are about to hit back hard. If their best operatives can’t outrun her, they mean to bring her running to them, using her five-year-old son as bait. Jane knows there’s no underestimating their capabilities, but she must battle her way back across the country to the remote shelter where her boy is safely hidden . . . for now.

As she moves resolutely forward, new threats begin to emerge: a growing number of brain-altered victims driven hopelessly, violently insane. With the madness spreading like a virus, the war between Jane and her enemies will become a fight for all their lives—against the lethal terror unleashed from behind the forbidden door.

About the Author:
Acknowledged as "America's most popular suspense novelist" (Rolling Stone) and as one of today's most celebrated and successful writers, Dean Ray Koontz has earned the devotion of millions of readers around the world and the praise of critics everywhere for tales of character, mystery, and adventure that strike to the core of what it means to be human.

Dean, the author of many #1 New York Times bestsellers, lives in Southern California with his wife, Gerda, their golden retriever, Elsa, and the enduring spirit of their goldens, Trixie and Anna.

With a plot that continually forces the reader to turn the next page and characters that make the reader consider each written word to truly savor the nuances, THE FORBIDDEN DOOR by Dean Koontz is a terrifying and captivating book.

But be warned, this book is not for the weary-hearted reader. As a huge Koontz fan, I know he always has good win out over evil in the end, but the path getting there is blocked by plenty of bristles and brutality.

The "Arcadians" are taking over Jane's fictional world, and it seems as though they're taking over the series' narrative as well. I loved reading from Jane's viewpoint. I disliked reading the chapters from the brutal Aracadian loyalists' viewpoints, because that was when the story became a challenge to read with all the foul language and extreme violence (physical, sexual, and mental). As I read those pages (because I didn't want to miss any plot points), I kept begging Koontz to please give me back Jane's perspective. LOVE HER. Hate the bad guys. But I suppose that's the point, eh?

The plot in THE FORBIDDEN DOOR kept me guessing and engaged. However, I kept wishing the next chapter would focus on Jane's direct plot line and less on the numerous villains.

When it came to characters, I was thrilled to see some of my favorites working together to rescue young Travis. Beyond that, the story certainly featured some unusual characters, which were a bit extreme and hard to believe. I'd have to say my least favorite was Egon Gottfrey, who believed nothing in the world actually existed. It was all "established by the Unknown Playwright" but then, as if a subliminal message, Koontz wrote, "There's no point hating the Unknown Playwright." Ha. Additionally, there were so many characters introduced, I struggled to know which ones were relevant to the long term story line and which ones were merely expendable. Many could have been cut without affecting the story's outcome. My favorite character (not counting Jane) would have to be Bernie Riggowitz. LOVE him. Everyone needs a Grandpa Bernie in their lives.

This is the fourth book in this series, and boy, there were plenty of unexpected events happening. While some passages seemed repetitive (like the continual explanation that a "LockAid lock-release gun will automatically pick any deadbolt"), there were new elements that happened in the "revolution" that really mucked things up - both for the Arcadians and for Jane. The Jane Hawk series of books definitely needs to be read in the proper order, from start to finish.

Dean Koontz has certainly mastered the art of writing a suspense novel. Some of my favorite lines from THE FORBIDDEN DOOR included:

"A thread of blood sews its way from the right corner of her mouth, down her chin, along her slender throat."

"With the sneeze quelled, she began to move again, only to press her face through the silken strands of a spiderweb that masked her from brow to chin. Startled, she paused to wipe off those sticky threads, wondering if the eight-legged architect might even now be crawling through her hair."

"...a pain in her chest, as if some demonic angler had cast a line and snared her heart with one of those fishing lures that had multiple wicked hooks."

Regarding the evil Arcadians, trying to take over the world: "They had more passion than those who resisted them. ... A passion to silence all dissent and to make a world in which they wouldn't have to hear an opinion at variance with their own."

"Death plays games with the living, just to impress upon them that no one is immune from the touch of his fleshless fingers, not even freckled little girls."

"Driving cool wheels when you go off a cliff won't buy you a soft landing."

And my ultimate favorite:

"Though evil could win in the short term, it could be defeated in time."

If you're a Dean Koontz fan, I recommend the Jane Hawk series. If you're already reading the series, keep reading, because Koontz offers terrific twists and turns.

[I received an e-copy of this book from the publisher in exchange for an honest review. This in no way influenced my opinion.]