I'm always hesitant when asked to read a memoir, because frankly, most of the ones I've read have been slow and boring. However, over the years, I've come across a few treasures in the genre, and because of that, I strive to keep an open mind when a tempting memoir crosses my path. When I was offered an early copy of BAGHDADDY by Bill Riley, my first thought was, "Who would put an image of a child aiming a gun on the cover of a book?" But then I decided the more important question was, "WHY is this child aiming a gun?" I had to read it. Scroll on down for my complete review. 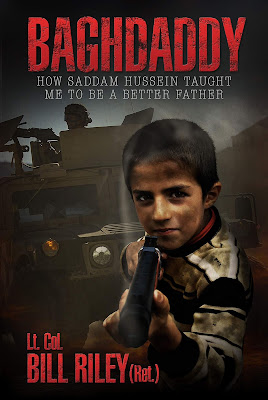 Description from the Publisher:
As a child, he was raised in an unstable and violent home by a mother struggling with mental illness. An absent father with a firm belief in tough love left him with only his sister to understand or comfort him as they faced a home full of harshness, resentment, and physical abuse. As a man, he braved the war-torn landscapes of Kuwait, Iraq, and Saudi Arabia. Having learned early from his father that only the strong survive, he enlisted in the Air Force after high school and began an impressive military career in intelligence analysis, communications, and supporting special operations, meeting incredible individuals along the way. Baghdaddy is Bill Riley's memoir: an honest and colorful depiction of his journey through a turbulent youth and into a challenging adulthood. This very human account of living in some of the least humane environments delivers the message that no matter how different we seem, we are all trying to make the best of life and learn how to be the best versions of ourselves. 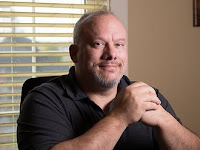 About the Author:
Bill Riley is a writer and retired US Air Force lieutenant colonel with interests in space exploration, coffee roasting, global communication, intelligence activities, and ancient ruins. Bill was an intelligence analyst during the Cold War. Later, he specialized in strategy and communications. During his career, he's worked with intelligence and special operations professionals from every service, virtually every intelligence agency, and several friendly foreign governments. Bill's deployments took him through combat zones across the Middle East where he played significant roles in Kuwait and Iraq, supported joint coalition operations, and helped nations rebuild after wars. He was the first US electronic warfare officer in Iraq for Operation Iraqi Freedom, he led the Air Force's largest network operations and security center, and he was the first cyberspace operations officer to receive the Air Force Combat Action Medal. He holds degrees in literature, public administration, and strategic leadership, and he is a graduate of Air Command and Staff College and the Air Force Space Command VIGILANT LOOK program. Bill lives in Idaho, just outside Boise, with his wife and two sons. Visit him online at: https://www.billrileyauthor.com/

BAGHDADDY, by Bill Riley, is a courageous and captivating memoir about a man who survived an abusive childhood, excelled as an Air Force officer, and applied lessons he'd learned to find peace as a father, husband, and human.

The first thing I noticed when reading this memoir was the high quality of writing, which shouldn't have surprised me considering Riley holds a degree in literature. (He earned two other degrees as well!) However, I found this to be an interesting dichotomy. Bill Riley grew up in a violent home, went on to survive violent combat missions, and yet somewhere, somehow, fostered his innate love for literature and writing.

The fact he lived past his childhood was a miracle by itself. Clearly, Riley was meant to live beyond his upbringing -- whether the purpose was to save fellow soldiers in combat, raise children in a healthier environment than he had, or merely to leave a mark of kindness on those along his path . . . Bill Riley is a survivor.

Of course, he didn't survive in isolation. Riley wrote, "I knew I had strong friendships, but I didn't realize, on a rational level, how wrong my life would have gone without them until I started connecting the dots" (page xi).

One of the lines that repeatedly struck me throughout the book was, "Why do they always use kids?" (page 14). Anyone who has endured or witnessed childhood trauma can grasp the depth of this question. Riley was "used" and abused in his childhood. During combat missions, he witnessed other children being used in atrocious ways. The question that repeated in my mind as a reader was, "Would Riley overcome these experiences to provide a better environment for his own children?"

BAGHDADDY by Bill Riley would make an excellent book club choice for any group of readers, because there are so many powerful situations, topics, and philosophies to be discussed.

The pages recounting his childhood abuse are hard to read, but they are so well written, they must be read. Additionally, these pages must be read to fully understand what Riley has endured and chosen to overcome to be the man of peace he is today.

I'm not a military buff, and I was concerned I would find the numerous pages of military stories boring, but I was wrong! Again, Riley is such a talented writer; with great skill, he painted vivid pictures and tapped into emotional wells, that I, as the reader, was compelled to read every word and turn every page.

Riley's stories about his time in the military gave me a peek behind a curtain I would never have experienced without reading this memoir. And I am thankful for that.

"When I arrived in Iraq, I found myself at the crossroads of who I could be and what I would be, and my time was running out" (page 10).

As if writing a novel, Riley employed techniques often used in fiction, such as knowledge gaps, rhetorical devices, and embedded tension. This type of writing is what makes a memoir compelling--fully engaging the reader.

My only criticism of the book was I wanted more scenes of resolution. If space was a concern, several existing scenes could have been cut without affecting the overall flow or impact,  allowing closure stories from his  fatherhood years. I wanted to know specifics of how he parented differently from his own parents. Did he ever hit his kids, even once? I wanted to know how he took the lessons he learned from his deployments and implemented them into his role as a father. Additionally, I wanted to know what his adult relationships were like with his sisters. I wanted to know if he ever sought out his friend Sarah. I wanted examples comparing and contrasting how Riley's father treated him as a child versus how Riley treated his own sons in similar situations.

For example, one of my favorite scenarios that connected his past, present, and future was when he described hunting rabbits with his father. Riley compared that experience to a combat mission where he utilized hunting lessons from his father to help save the lives of his team, and then Riley contrasted that to fatherhood and how instead of hunting, he taught his sons to fish.

But I suppose, any book that leaves you wanting more is a good book. Yes?

Some captivating passages from the book:

"From an early age, I understood there were monsters in the world, but, at the time, I didn't realize how fast they could creep up on you. ... They're fiends who wear the faces of the people you know and love the most. Familiarity gives them the power to hurt you, bad" (page 15).

"The bloody washcloth came open, and ice cubes bounced across the floor. They formed an archipelago of pink islands in a linoleum sea, and my father dragged me from the house by my hair ..." (page 47).

A friend of Riley's discussing future parenthood: "He [your son] won't understand where you came from, so don't even try to explain how good he's got it, because if you do your job raising him, he won't even be able to comprehend the world you grew up in. ... Your world isn't his world. His world is a safe and secure ... How do you explain hungry if he's never been?" (page 193).

"There was something to be said for building relationships one cup of tea at a time, and I saw a different Kuwait leaving than I did when I first arrived" (page 209).

"As I secured my helmet to my head, I turned back for one last look ... the clouds broke, and the flowers blazed in a thin stream of light that cut through the shadows of the ruin. ... Then the clouds coalesced. The light was gone, and everyone turned slowly back to what they'd been doing" (pages 285-286).

"The larger combat convoys were covered with so much firepower they looked like porcupines that belched dragon fire" (page 310).

[I received a complimentary copy of this book from the author in exchange for an honest review. This in no way influenced my opinion.]