Oh, I love a good murder mystery, so I was excited to read this new book by Allison Brennan, who is an author I've never encountered before. Scroll on down for my complete review. 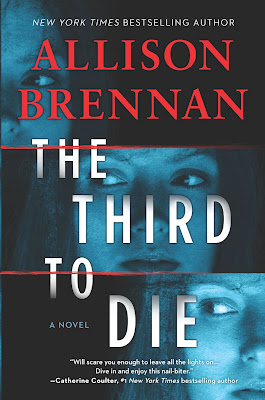 Description from the Publisher:
New York Times bestselling author and gifted storyteller Allison Brennan's new standalone thriller features a troubled female police detective and an ambitious FBI special agent who wind up at the center of a ticking-clock investigation into a diabolical serial killer.

Brennan's novel will launch a book-a-year series featuring a fabulous cast of recurring characters. It’s the story of a troubled female police detective and an ambitious FBI special agent who wind up at the center of a ticking-clock investigation into a diabolical serial killer; and the bond they forge in this crucible sets the stage for the future books in the series.

Detective Kara Quinn is visiting her hometown of Liberty Lake, Washington, after being placed on administrative leave by the LAPD, when she comes upon the mutilated body of a young nurse during an early morning jog. The manner of death is clearly ritualistic; she calls it in. Meanwhile back in DC, special agent in charge Mattias Costa is meticulously staffing his newly-minted Mobile Response Team. One of his first recruits is the brilliant FBI forensic psychologist Catherine Jones. When word reaches Matt that the Washington state murder appears to be the work of the Triple Killer--it will be the first case for the MRT. Jones has done the only profile on this serial killer, but she is reluctant to join the unit, still shaken by the death of her sister a year ago under circumstances for which she holds herself responsible. But only she holds the key to understanding the killer's obsessive pattern--three murder victims, three deep slashes a piece, each three days apart, each series beginning on a March 3rd--3/3, then a three-year hiatus before he strikes again.

This time they have a chance to stop him before he claims another victim strikes, but only if they can figure out who he is and where is is hiding. 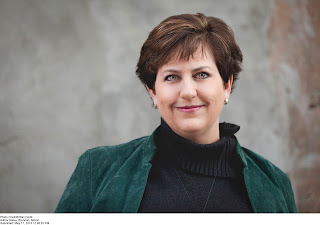 About the Author:
Allison Brennan is the New York Times and USA Today bestselling and award-winning author of three dozen thrillers and numerous short stories. She was nominated for Best Paperback Original Thriller by International Thriller Writers, has had multiple nominations and two Daphne du Maurier Awards, and is a five-time RITA finalist for Best Romantic Suspense. Allison believes life is too short to be bored, so she had five kids. Allison and her family live in Arizona. Visit her at allisonbrennan.com

Third to Die by Allison Brennan is a page-turner!

With a balanced cast of characters, a fascinating plot, and interesting locale, Third to Die provides all the best elements of a terrific FBI mystery.

If you're a fan of police-procedural novels and/or a fan of the TV show Criminal Minds, you'll love Brennan's latest novel. This is the first book I've read by her, and now I'm a forever-fan!

The story is based on a "Mobile Response Team, a new squad of the FBI" which will aid small towns and underfunded communities in the solving of major crimes.

While there is a lot of head-hopping with multiple points-of-view (there are a LOT of characters), Brennan does a fine job of clarifying whose perspective we're reading the story from. The only time it got weird was when the POV switched to a five-year-old boy. And yet, while it was weird, I must admit, the conclusion of his POV choked me up - almost to tears! The main characters were set up with personal wounds they each had to overcome in order to help solve the crime, and these emotional hurdles made them so much more lovable. For example, Brennan writes about Kara: "She left this place for good at the age of eighteen with a GED in her pocket and the hope of being a cop in her heart." And regarding Catherine: "You're the single best profiler the FBI has. You're the one who has these skills, this awesome and terrifying ability to get into the heads of killers ... if you leave the FBI now, because of your sister's murder, it will haunt you forever." Additionally, while I assumed from the beginning that some of these characters would have to die, when the time came, I was still surprised in the moment and impressed with how Brennan handled it.

There were several places throughout the narrative where I felt like Brennan's writing was repetitive, but overall I loved the writing. For example, passages like: "Catherine disliked the word normal because there was no true normal. To her, normal simply meant a person who flew under the radar, who didn't register as good or bad, kind or cruel, attractive or unattractive." If you have an aversion to the f-word, be warned, Brennan uses the word a lot, but not so much that it made me stop reading.

As the story reached its climax and the hunt for the killer was at full-throttle, I was fully engaged and reading faster and faster in order to see how the story would be resolved.

I'm always concerned when I see that a novel is the first in a series, because I dislike cliff hangers at the end of a novel. My favorite way to read a series is to have each book have its own plot neatly tied up at the end, with the characters continuing from novel to novel. I am thrilled to say this new series by Brennan does just that! I look forward to reading the next in the series and continuing on with this great cast within the Mobile Response Team.


[I received an early copy from the publisher via Net Galley in exchange for an honest review. This in no way influenced my opinion.]