When I read the praise: “The YA thriller of the summer” (Bustle), I knew I had to give this book a try. Scroll down for my complete review. 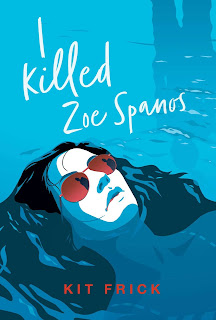 Description from the Publisher:
For fans of Sadie and Serial, this gripping thriller follows two teens whose lives become inextricably linked when one confesses to murder and the other becomes determined to uncover the real truth no matter the cost.

When Anna Cicconi arrives to the small Hamptons village of Herron Mills for a summer nanny gig, she has high hopes for a fresh start. What she finds instead is a community on edge after the disappearance of Zoe Spanos, a local girl who has been missing since New Year’s Eve. Anna bears an eerie resemblance to Zoe, and her mere presence in town stirs up still-raw feelings about the unsolved case. As Anna delves deeper into the mystery, stepping further and further into Zoe’s life, she becomes increasingly convinced that she and Zoe are connected—and that she knows what happened to her.

Two months later, Zoe’s body is found in a nearby lake, and Anna is charged with manslaughter. But Anna’s confession is riddled with holes, and Martina Green, teen host of the Missing Zoe podcast, isn’t satisfied. Did Anna really kill Zoe? And if not, can Martina’s podcast uncover the truth?

Inspired by Daphne du Maurier’s Rebecca, Kit Frick weaves a thrilling story of psychological suspense that twists and turns until the final page.

About the Author:
Kit Frick is a novelist, poet, and MacDowell Colony fellow from Pittsburgh, PA. She studied creative writing at Sarah Lawrence College and received her MFA from Syracuse University. When she isn’t putting complicated characters in impossible situations, Kit edits poetry and literary fiction for a small press and edits for private clients. She is the author of the young adult thrillers I Killed Zoe Spanos, All Eyes on Us, and See All the Stars, all from Simon & Schuster / Margaret K. McElderry Books, as well as the poetry collection A Small Rising Up in the Lungs from New American Press. Kit is working on her next novel. Let's keep in touch! Please visit me online at www.kitfrick.com and follow me on Twitter, Instagram, and Pinterest @kitfrick. For insider access to book news, events, and giveaways; a behind-the-scenes look at my writing life; and recommendations drawn from my endless fascination with psychological suspense and true crime, sign up for my monthly newsletter These Little Secrets at bit.ly/KitLetter.

This summertime thriller by Kit Frick did not disappoint! It is the first novel I've read of Frick's, and now I am a fan!

With terrific writing, a complex cast of characters, and a non-linear timeline, Kit Frick's I Killed Zoe Spanos dangles story questions and clues that will compel readers to keep turning pages until the satisfying end!

The characters were well developed with full arcs, the plot was twisty, the format was engaging with podcasts, police interviews, and narratives, and Frick did an amazing overall job of storytelling.

The only issues with the story that bothered me in the slightest were: 1) The extremely large cast of characters made me struggle to keep them all straight. 2) The changing points-of-view in the midst of a non-linear timeline made me re-read sections to grasp who was telling the story and when, especially in the beginning of the book. Once I got into the rhythm, it became easier to follow. (These are not reasons to discount the book, merely reasons, for me that I had to work a little harder to immerse myself completely within the world of the story.)

Nearing the end of the story, I read faster and faster, determined to solve the mystery before it was revealed. While I did guess a couple of elements, I was pleasantly surprised at the final reveals and resolutions. Loose ends were tied up nicely, leaving me quite content. Nicely done, Kit Frick!

I look forward to picking up another one of her books.

"She looks like she's been living ten seconds away from tears for months."

"The banister, once a grand thing, is dusty and coated with bird shit."

"She hurries quietly around the side of the estate, into the backyard where the weeds reach up to snag her tights like bony fingers in the moonlight."

[I received a free copy of this book from the publisher via Net Galley in exchange for an honest review. This did not influence my opinion at all.]