Book Review: WHEN I WAS YOU by Amber Garza

The cover reads: Two women. One life. They can't both have it.

Oh. Boy. COUNT ME IN! Such a creepy premise: Two women, one name. When the older Kelly Medina receives a phone call from the pediatrician to remind her of her son's upcoming appointment, she tells them they must have the wrong phone number. That's when she discovers there's another Kelly Medina in town. That's where the obsession begins.

Scroll down to read my full review. 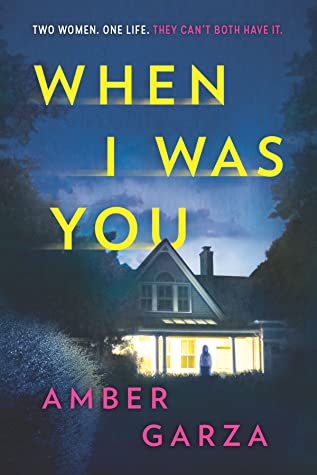 When I Was You

YOU meets FATAL ATTRACTION in this up-all-night psychological thriller about a lonely empty-nester's growing obsession with a young mother who shares her name.

It all begins on an ordinary fall morning, when Kelly Medina gets a call from her son's pediatrician to confirm her upcoming well-baby appointment. It's a cruel mistake; her son left for college a year ago, and Kelly has never felt so alone. The receptionist quickly apologizes: there's another mother in town named Kelly Medina, and she must have gotten their numbers switched. But Kelly can't stop thinking about the woman who shares her name. Lives in her same town. Has a son she can still hold, and her whole life ahead of her. She can't help looking for her: at the grocery store, at the gym, on social media. When Kelly just happens to bump into the single mother outside that pediatrician's office, it's simple curiosity getting the better of her. Their unlikely friendship brings Kelly a renewed sense of purpose, taking care of this young woman and her adorable baby boy. But that friendship quickly turns to obsession, and when one Kelly disappears, well, the other one may know why.

Amber Garza has had a passion for the written word since she was a child making books out of notebook paper and staples. Her hobbies include reading and singing. Coffee and wine are her drinks of choice (not necessarily in that order). She writes while blaring music, and talks about her characters like they're real people. She lives with her husband and two kids in Folsom, California, which is—no joke—home to another Amber Garza.

I LOVED THIS BOOK FROM PAGE ONE!!

Amber Garza does an amazing job of weaving story questions throughout the prose, compelling the reader to keep turning pages to find out what will happen next!

When I Was You was easily the best book I've read in ages.

Normally, I don't enjoy reading a story written in second-person POV, but Amber Garza used the device so skillfully to ramp up the creepy factor of the book! The second-person POV made it feel like the main character was writing a letter to the woman she was obsessed with. For example:

"As the water boiled, I thought about you. Thought about how lucky you were to have a baby and your whole life ahead of you."

There were really only two elements of the story that bugged me. One: there were moments of missing time for the main character that were never resolved. Two: the sexual relationship with Rafael was too cruel and misogynistic. And yet, even with those two things, this is still the best book I’ve read in ages, and I highly recommend it to anyone who loves a good mystery and suspenseful novel.

When I Was You is the type of book you can't stop reading, and when you do have to stop (for work, sleep, shower, whatever) you can't stop thinking about it.

"You seemed surprised, almost shocked, at my kindness. It endeared me to you a little. I knew that feeling. I often felt like everyone around me was my enemy, not my friend. Rarely did people stop to hep each other. It was like everyone was too into themselves to notice when someone was in need."

"But if you thought that was all it would take to break me, you thought wrong. You'd grossly underestimated the determination of a mom."

I highly recommend When I Was You by Amber Garza.

[I received a free copy of this book from the publisher via Net Galley. This in no way influenced my opinion of the book.]