This book has such an AWESOME cover! It immediately drew me in. Scroll down for my complete review. 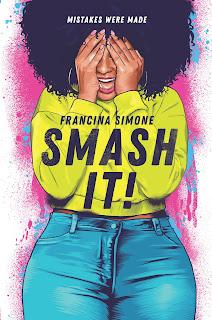 Olivia “Liv” James is done with letting her insecurities get the best of her. So she does what any self-respecting hot mess of a girl who wants to SMASH junior year does…

After Liv shows up to a Halloween party in khaki shorts—why?—she decides to set aside her wack AF ways. She makes a list—a F*ck-It list.

1. Be bold—do the thing that scares me.

2. Learn to take a compliment.

3. Stand out instead of back.

She kicks it off by trying out for the school musical, saying yes to a date and making new friends. Life is great when you stop punking yourself! However, with change comes a lot of missteps, and being bold means following her heart. So what happens when Liv’s heart is interested in three different guys—and two of them are her best friends? What is she supposed to do when she gets dumped by a guy she’s not even dating? How does one Smash It! after the humiliation of being friend-zoned?

In Liv’s own words, “F*ck it. What’s the worst that can happen?” 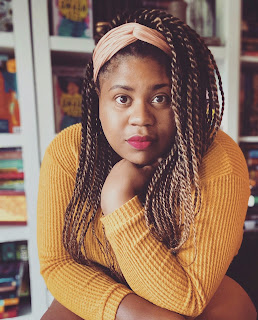 Francina Simone believes in one thing: authenticity. She writes YA stories full of humor and hard life lessons with sprinkles of truth that make us all feel understood. Her craft focuses on stories about girls throwing caution to the wind to discover exactly who they are and what it means to love. Francina is also known for her BookTube channel, where she discusses controversial topics in books.

SMASH IT by Francina Simone paints a fascinating picture of life as a teenage girl -- a girl who just wants to have the guts to be herself. While I was never into the theater scene, I certainly was a girl who wanted to be myself. Problem was . . . figuring out who exactly that was! Simone does a great job of exploring that idea within the pages of SMASH IT.

One way the main character tries to find herself is by stepping out of her comfort zone and auditioning for the school play. (You don't have to be a theater buff or a teenage girl to enjoy this book!) The process allows her to meet new people and have experiences she would have missed out on otherwise.

I'm not a huge Shakespeare buff, so a lot of the references within the story were lost on me. But this didn't diminish my ability to enjoy the story line. Another element that was lost on me was much of the slang. I don't know if it was because I'm from a different region of the country or because I'm older or because I'm white, but nonetheless, I had fun extrapolating the intended meanings.

There are a lot of sexual themes and a few scenes in the book - but when you're trying to figure out who you are and how to grow into yourself and love yourself - your sexuality plays a significant role in that process. The author did a fabulous and thoughtful job with this topic.

Because she's working on finding herself, she creates a "F*ck It List" to help her overcome her insecurities. So, obviously, be forewarned if you have a huge aversion to cuss words; they are used a lot in this story.  But also, keep in mind, her list serves a terrific purpose. Here's an example of it:

2. Learn to take a compliment.

3. Stand out instead of back.

Page after page, I found myself smiling because:

Simone is a great writer with an ability to fully immerse the reader within the story world.

Some of my favorite lines from the story:

"I look like the freak who has no social shame. The truth is I have too much social shame. So much shame that it seeps out of me like fresh cut garlic on the back of the tongue."

"I'm not uncool, but I do these uncool things as if I'm addicted to self-sabotage."

"I don't drink -- I think alcohol is nasty. Like, who chooses to drink that burn-your-throat-flavor when you could drink a smoothie? I'd rather die fat than from liver problems."

"If I'm going to stand out, then I have to start standing on my own."

[I received an early copy for free from the publisher via Net Galley. This did not influence my opinion.]