Book Review: CONFESSIONS ON THE 7:45 by Lisa Unger

Oh . . . I love twisty complicated thrillers! Scroll down for my complete review. 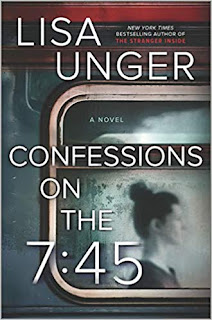 From master of suspense Lisa Unger comes a riveting thriller about a chance encounter that unravels a stunning web of lies and deceit.

Be careful to whom you tell your darkest secrets…

Selena Murphy is commuting home from her job in the city when the train stalls out on the tracks. She strikes up a conversation with a beautiful stranger in the next seat, and their connection is fast and easy. The woman introduces herself as Martha and confesses that she’s been stuck in an affair with her boss. Selena, in turn, confesses that she suspects her husband is sleeping with the nanny. When the train arrives at Selena’s station, the two women part ways, presumably never to meet again.

Soon Selena finds her once-perfect life upended. As she is pulled into the mystery of the missing nanny, and as the fractures in her marriage grow deeper, Selena begins to wonder, who was Martha really? But she is hardly prepared for what she’ll discover.

Expertly plotted and reminiscent of the timeless classic Strangers on a Train, Confessions on the 7:45 is a gripping thriller about the delicate facades we create around our lives.

Lisa Unger is a New York Times and internationally bestselling author. With books published in twenty-six languages and millions of copies sold worldwide, she is widely regarded as a master of suspense. Her new release is CONFESSIONS ON THE 7:45.

Unger’s critically acclaimed books have been named on “Best Book” lists from the Today show, Good Morning America, Entertainment Weekly, People, Amazon, Goodreads, and many others. She has been nominated for, or won, numerous awards including the Hammett Prize, Macavity, Thriller Award, and Goodreads Choice. In 2019, she received two Edgar Award nominations, an honor held by only a few authors, including Agatha Christie. Her writing has appeared in The New York Times, Wall Street Journal, NPR, and Travel+Leisure. She lives on the west coast of Florida with her family.x

The truth of the matter is we've all become skilled con artists when it comes to posting on social media. Why is that? What are we lying (or pretending) about in our lives, wanting so desperately to convince others of? Quote used in the book from George Orwell's 1984: "If you want to keep a secret, you must also hide it from yourself."

While I did like this book, I disliked the disparagement of marriage, the fictional misuse/exploitation of the "Me Too" movement, and the sex scenes right at the start of the book. These are obviously my personal tastes. Not everyone will feel the same way about these topics. Additionally, there is a lot of cussing and use of the f-word in the story - so if that offends you, be forewarned.

In the beginning, I really struggled to keep track of the large cast of characters, but I relaxed into it, and trusted that the author would guide me along the path and help me remember who was who throughout the story.

Unger is certainly a master at suspense, embedding creepy little elements to keep the reader fully engaged, such as: "But when she looked out her bedroom window just before turning out her lights to sleep, his car was still there."

Like solving a jigsaw puzzle, Lisa Unger slowly gives the reader one piece at a time, out of order but meticulously filling in the whole picture so it all makes sense at the end. And I was happy that this story had a satisfying ending.

I enjoyed this complicated and twisty thriller from Lisa Unger, and I look forward to reading more books written by her!

"The girl didn't know what she was saying. She was a mouse. And the mouse was so afraid that she was looking to the cat for love."

"The truth like a wildfire that burned everything in its path. One that destroyed but also cleansed. And then from the ash, new life."

"Write it, said Beth. When we narrate our experience, we take control of it. And in controlling the story of our past, we can create a better future."

[I received a free copy of this book from the publisher via NetGalley, which in no way influenced my opinion.]