Oh, this was a great book! AND that cover - GORGEOUS! Scroll on down for my complete review. 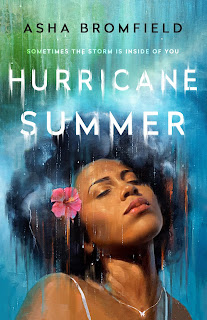 In this sweeping debut, Asha Bromfield takes readers to the heart of Jamaica, and into the soul of a girl coming to terms with her family, and herself, set against the backdrop of a hurricane. Tilla has spent her entire life trying to make her father love her. But every six months, he leaves their family and returns to his true home: the island of Jamaica. When Tilla’s mother tells her she’ll be spending the summer on the island, Tilla dreads the idea of seeing him again, but longs to discover what life in Jamaica has always held for him. In an unexpected turn of events, Tilla is forced to face the storm that unravels in her own life as she learns about the dark secrets that lie beyond the veil of paradise―all in the midst of an impending hurricane. Hurricane Summer is a powerful coming of age story that deals with colorism, classism, young love, the father-daughter dynamic―and what it means to discover your own voice in the center of complete destruction.

Asha Bromfield is an actress and writer of Afro-Jamaican descent. She is known for her role as Melody Jones, drummer of “Josie and the Pussycats” in CW’s Riverdale. She also stars as Zadie Wells in Netflix’s hit show, Locke and Key. She currently lives in Toronto, and her name translates to "Life" in Swahili. In her spare time, she loves studying astrology, wearing crystals, burning sage, baking vegan desserts, and taking walks to the park with her dogs Luka and Kyra. Hurricane Summer is her debut novel.

"Everyone has that one summer. The summer that changes your life."

Oh, I loved this book, and I'm so glad I read it, but I must admit that I almost put it down after reading the opening pages. Why? Two reasons. One: in the opening, the author warns that this story contains sexual assault. That is a topic I don't like to read about, and I'll avoid it whenever possible. But I chose to read the story, because I appreciated the author's warning, and I hoped that once I got to that part of the story I'd be able to skim over it and not internalize it. Thankfully, the scene was short, but it was still heart wrenching. All sexual assault is heart wrenching. Two: also in the beginning of the book is a glossary of Patois words. I've never been strong with other languages, and the idea of needing to learn another language in order to read this book felt daunting. I chose to ignore the glossary and read the story as if there was none. Heavy dialect and Patois words within the book's dialogue made it a challenge to read, but it became easier as I got into the rhythm of it. "Yuh haffi go learn how fi chat Patois if yuh wan keep up. Mi ah nuh Rosetta stone." Other than these two elements, I absolutely loved the story. So good!

As a kid with divorced parents who spent summers with my father, I could relate on so many levels with this story. Kids want to be loved and valued and protected by their parents, and Asha Bromfield does an excellent job exploring this facet of life. "This time it is me searching for the right words that will make him stay. The right words to convince him that we are his daughters and he should want to stick around. That we are fun enough. Interesting enough. Good enough."

Bromfield also does an excellent job of immersing the reader in the setting of Jamaica. Her descriptions provide great imagery of the country, and since the main character grew up in Canada, she's able to compare and contrast the two countries and cultures.

The characters of this story have a wide range of emotional flaws, habits, and traits. Their images and personalities stuck with me long after the story was over.

Hurricane Summer by Asha Bromfield is a story of a young woman surviving her own personal hurricane, sustaining injuries, healing, and growing. The writing is beautiful and captivating.

Some of my favorite lines from the story:

"The air is moist and dewy from the rainfall last night, and birds sing to each other as they fly over our heads. It becomes clear that nothing compares to the birth of a new day on a crisp Jamaican morning."

"I have wanted my father's love for too long. But now, I am weary. Now, I am done. It's a strange pursuit--chasing the love of your father. When the first man who was supposed to want you, doesn't."

"We celebrate the way that the island is coming alive in a way like never before for its own destruction. We watch in reverence as it is being forced to destroy itself, to re-create itself again."

"When they ask how I weathered the storm, I will tell them I did not. I was uprooted like the palm trees and shot down like the birds form the stormy skies. I was ravished like the zinc houses and devoured like the soil as it swallowed itself whole. I was ruined. I was disaster. I was dancing in the eye of God's will."

[I received an early copy of this book from the publisher via NetGalley in exchange for an honest review. This in no way influenced my opinion.]