Book Review: WHERE I LEFT HER by Amber Garza

As a fan of Amber Garza, I jumped at the opportunity to read her newest book, WHERE I LEFT HER. Scroll down for my complete review. 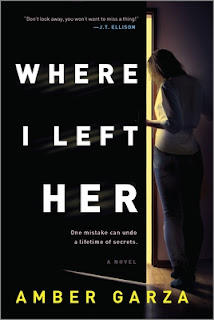 Where I Left Her

From the author of When I Was You comes a spine-tingling new thriller about a mother’s worst nightmare come true, when her teenage daughter goes to a sleepover and doesn’t come back.

Whitney had some misgivings when she dropped her increasingly moody teenage daughter, Amelia, off at Lauren’s house. She’d never met the parents, and usually she’d go in, but Amelia clearly wasn’t going to let something so humiliating happen, so instead Whitney waved to her daughter before pulling away from the little house with the roses in front.

But when she goes back the next day, an elderly couple answers the door—Amelia and Lauren aren’t there, and this couple swears they never were, that she’s at the wrong house. As Whitney searches for Amelia, she uncovers a trail of lies her daughter has told her—from the Finsta account to rumors of a secret relationship. Does she really even know this girl she’s raised? And Amelia’s not the only one with secrets. Could Whitney’s own demons have something to do with her daughter’s disappearance, and can Whitney find her before it’s too late?

Amber Garza has had a passion for the written word since she was a child making books out of notebook paper and staples. Her hobbies include reading and singing. Coffee and wine are her drinks of choice (not necessarily in that order). She writes while blaring music, and talks about her characters like they're real people.

Without even reading the description, I knew I wanted to read this book, because I LOVED Garza’s previous book, When I Was You.

Filled with twists and turns, creepy subtext, and multiple points-of-view, Where I Left Her by Amber Garza does the thriller genre proud. Garza’s writing and storytelling certainly exceeded my expectations.

Admittedly, I was concerned when I discovered the story would be told in a non-linear timeline, because that is always a challenge for me personally, but I trusted the author would guide me through it all. There are a lot of flashbacks told in italics, which can be hard to read in excess, but the story is worth the effort.

I wanted to read the entire book in one sitting, but had to pause halfway through because of life responsibilities, but I eagerly finished the second half without stopping once, because I needed to find out how the story was going to end.

Where I Left Her was a terrific mystery with plenty of clues to help solve the mystery and uncover the true villain along with the characters in the story.

I look forward to reading more from Garza -- a great storyteller.

[I received an early copy of this book for free from the publisher via NetGalley in exchange for an honest review. This in no way influenced my opinion.]