Scroll down for my complete review . . . 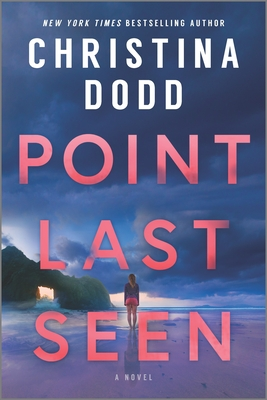 Description from the Publisher: LIFE LAST SEEN: When you’ve already died, there should be nothing left to fear… When Adam Ramsdell pulls Elle’s half-frozen body from the surf on a lonely California beach, she has no memory of what her full name is and how she got those bruises ringing her throat. GIRL LAST SEEN: Elle finds refuge in Adam’s home on the edge of Gothic, a remote village located between the steep lonely mountains and the raging Pacific Ocean. As flashes of her memory return, Elle faces a terrible truth—buried in her mind lurks a secret so dark it could get her killed. POINT LAST SEEN: Everyone in Gothic seems to hide a dark past. Even Adam knows more than he will admit. Until Elle can unravel the truth, she doesn’t know who to trust, when to run and who else might be hurt when the killer who stalks her nightmares appears to finish what he started…

About the Author: Christina Dodd builds worlds filled with suspense, romance, and adventure and creates some of the most distinctive characters in fiction today. The bestselling author of more than fifty novels, her works have been translated into twenty-five languages, won the Romance Writers of America's Golden Heart and RITA awards, and been on Library Journal's Best Books of the Year list.

I loved WRONG ALIBI by Christina Dodd, so when I was given the opportunity to read an early copy of her newest book, I was excited.

I loved the fictional town that Dodd created in POINT LAST SEEN. And I loved the variety of characters. But too many elements of this story were forced, especially the romance between the main characters. There were multiple instances where the romance was vulgar and other spots where it was too immaturely described. I also found myself extremely frustrated trying to guess how old the characters were. The first mention of Elle's age was literally halfway through the book, and she was identified as 24, but then later in the book, she's 28. Elle only ever guesses at Adam's age - somewhere in his thirties.

I seriously tried so hard to love this book, because I loved the last one I read by Dodd, but the plot here dragged on and on. Maybe my opinion is in the minority. Maybe my expectations were too high. But this story didn't quite live up to its potential.

[I received an early copy from the publisher via Net Galley in exchange for an honest review. This in no way influenced my opinion.]