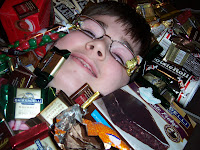 How do authors come up with some of those crazy colorful characters in their books?

Is it their imagination? No, it's their observation!

Why create a new character, when you are surrounded by real characters? LOL.

Jacob, who prefers to be called Chocolate (a self determined nickname), loves pink. He wears pink braces on his teeth, pink shirts to school, and pink pajamas to bed. If anyone makes a smart-alec comment about his fondness for pink, Jacob will pause to look them directly in the eye, and then say, "Hey, not everyone can do pink, but I am completely secure with my manhood." At which point, the smart-alec usually replies with, "Huh..." and walks away. Jacob makes friends everywhere he goes. Why? Because he's not afraid to be happy. At the Rec Center, he runs up the two flights of stairs and jumps high at the top. He does a spread eagle, landing with both arms in the air and sings, "Tah-Dah!"  He's okay with the fact that all the parents sitting just a few feet away watching their toddlers' gymnastics class turn their heads with a "What the... heck?" kind of look on their faces. He's happy.

He'd make a great character for a book... and luckily for me, I can observe him on a daily basis. If you look closely at the picture above, you will see not only his pink braces peeking out, but also his pink pajamas buried under the chocolate.

Have you read the Stephanie Plum books by Janet Evanovich? Talk about some colorful characters!!

"All writers are people watchers," Janet explains in How I Write. "If you want characters that ring true, take a really close look at the people around you: that buttoned-up old lady on the train as well as the girl with fourteen facial piercings who hangs out at your local coffeehouse" (page 5).

Do you associate with a real character on a daily basis? Who?