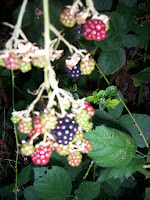 Ah, blackberries. Love them. We make blackberry jam, pie, syrup, muffins, pancakes, cookies, and more. Luckily, we have a productive bush in our backyard.

Some people will claim that a blackberry bush is nothing more than an intrusive weed. Well, it can be, if it's not properly tended.

Anyone who's ever picked blackberries knows the bush (in it's natural form) is spiked with needle like thorns. The torns are not only on the branches, but they can also be found on the underside of the leaves.  The only thing worse than being stabbed by a blackberry bush thorn while picking, is being stabbed by the hardened dried-out thorns when the bush is dormant.

Relate this to editing your manuscript. The dead weight, the excess branches, need to be cut. The extra words in your story make it tough for the reader to find the gems of your story. Some readers may give up, because it's just too much work.

Cut the dead weight. When your writing is lighter, it may produce more valuable gems.