Blogfest: Show Me the Voice! 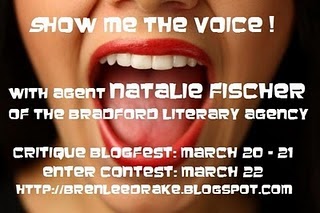 Ha, coincidence that my last post was on the craft of voice, and now today, here's a blogfest on the same topic!

Here are the first 250 words from my finished manuscript, THE EDUCATION OF THIA (working title ... I'm considering changing it, but I'm having trouble deciding! Ack.)

Since the contest is based on VOICE - - let me know what you think:

Some old dead guy once said a journey of a thousand miles begins with just one step. Obviously. I only wish I’d noticed sooner where my steps were taking me. One of those first course-altering steps happened on a cold November morning.

My best friend, Janie, arrived at my house later than usual to walk to the bus stop. She chattered on about her new fluffy snow white parka. Her words bounced in rhythm with her black ringlets, and even though she had a hood, she would never smash her perfect curls just to stay warm. The crisp air made the tip of her nose red, but the rest of her face remained alabaster white. She continued to talk as fast as she walked. I simply smiled and nodded. We’d been best friends for years, and at thirteen, having a friend made riding the bus bearable – on a normal day.

We arrived at the bus stop and scanned over a dozen people for Tim and Josh. They stood on the other side of the group. Tim shoved Josh jokingly, and a cloud of white air escaped his mouth as he laughed. He glanced in my direction, and his smile paused. His blue eyes made my heart accelerate. Tim looked cuter than ever with his bomber hat and rosy cheeks.

Janie whacked me on the hip. “Omigosh, Thia. Here they come. Smile.”

While Janie hoped Josh and Tim would ask us to the upcoming school dance, I hoped to speak to Tim without sounding like a complete dope.

Email ThisBlogThis!Share to TwitterShare to FacebookShare to Pinterest
Labels: blogfest, contests, THE EDUCATION OF THIA, voice