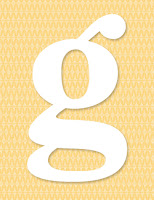 The letter G is for GASP!
Okay ... my regular followers know I like to eavesdrop ... really, who doesn't? Truth!

Wednesday, I had to pull my daughter from school for an orthodontist appointment (a-whole-nother story). While I was walking from the parking lot to the entrance of the school, I eavesdropped on the two teenage boys walking behind me.

Conversation caught in the middle:

Guy with two ear rings: Can't he drive you?
Guy in purple jacket: No! My brother can't drive anywhere now.
GWTER: Why?
GIPJ: The last time he drove he killed someone.
GWTER: What!?
GIPJ: Yeah, but it's no big deal. It wasn't his fault.
GWTER: Who died? Someone in his car?
GIPJ: No. The other guy who hit him.
GWTER: Died?
GIPJ: Yeah. He was on a motorcycle, and he hit my brother's car.
GWTER: Is your brother in trouble?
GIPJ: No. Worst he'll get is involuntary manslaughter. But, it wasn't his fault.

Seriously? Someone is dead and GIPJ was only focusing on the fact that it wasn't his brother's fault.

It makes me wonder if our teenagers are desensitized to death and violence. They see so MUCH more of it than previous generations.

I wanted to turn around and shake him.

When we reached the doors, I held it open for him so I could get a good look at his face. He was not joking. His face was sad. Maybe that's just the way teenage boys talk, or justify in their heads, or avoid emotion; but OH. MY. GASP!


Are teenagers desensitized to death?