The letter K stands for KOOKY
(which means krazy, in a kick-butt kind of way). 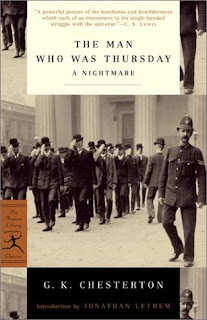 Monday, while riding in a car for a gazillion hours, I had the opportunity to listen to a computer voice read a book from a Kindle (oh ... wait ... maybe K stands for KINDLE!). HA. That alone deserves the KOOKY award.

If you are driving a car by yourself - do NOT attempt to listen to a Kindle book aloud. It will put you into a coma within five minutes.

Luckily, for me, I had already read twenty-five pages into the book the previous night. So, I already had a feel for the language and voice of the book.

"That young man with the long, auburn hair and the impudent face--that young man was not really a poet; but surely he was a poem. That old gentleman with the wild, white beard and the wild, white hat--that venerable humbug was not really a philosopher; but at least he was the cause of philosophy in others" (THE MAN WHO WAS THURSDAY by GK Chesterton).

A friend of mine thinks the book is dumb. But, I think it's hilarious. The reviews on goodreads.com are almost as funny as the book itself. One guy said he lost his backpack because of this book. Another person gave the book five stars, but said the story made no sense.

Have you read anything hilarious lately?