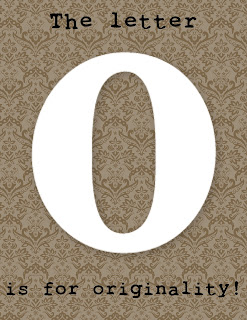 Originality ... is there really such a thing? I mean, how many times can someone create a fresh original plot featuring fresh original characters? Hasn't it all been done by now?﻿

According to Agent Donald Maass: "Originality comes not from your genre, setting, plot, characters, voice or any other element on which we can work. It cannot. It isn’t possible. Originality can come only from what you bring of yourself to your story. In other words, originality is not a function of your novel; it is a quality in you" ( Writer Unboxed post ).

Okay. But what does that mean?

Agent Kimberly Shumate wrote: "Out of the 50+ submissions I receive each week, there will be five projects that catch my eye mostly for their originality. Out of those five, maybe one will survive the scrutiny and editorial changes I suggest. ... If the author is willing to work with me to make their book the best it can be, this usually results with an offer of a contract, but it’s about one out of 100 submissions that are signed. Originality is what I look for first" ( Guide to Literary Agents post ).

Okay. But what is orginality?

And Agent Laney Katz Becker wrote regarding a query letter she'd received: "After reading the pitch, I’m loving this because it all sounds so fresh. You can literally go through each sentence and not come up with another novel that features the same thing. For instance, can you name
another book where the protagonist is a medical illustrator? How about a story where a young girl and an adult woman (who aren’t related) form some special bond? And a celebrity chef?! It all just sounds like a story I haven’t read before—and I really like that" ( Guide to Literary Agents post ).


Definition of ORIGINALITY
1: the quality or state of being original
2: freshness of aspect, design, or style
3: the power of independent thought or constructive imagination
( Merriam Webster )

So ... does your writing have ORIGINALITY (aka the state of being original)??

Email ThisBlogThis!Share to TwitterShare to FacebookShare to Pinterest
Labels: A to Z Challenge, agents, how to get an agent, originality, writing