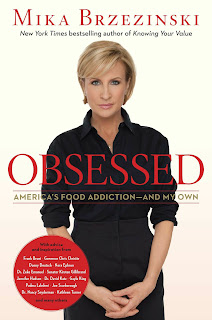 A size two, tall, gorgeous blonde woman tells a 250 pound woman, “You have a problem.”


How would YOU react? … Wait. What if I told you they were out on the water in a motor boat together?


What if that skinny woman went on to say, “You’re not just overweight—you’re fat. You’re OBESE.”


What if I told you they were friends?


Well, if I had been the fat woman, and a little size two woman said that to me … I would toss her over the side of the freaking boat and speed away!


Can a privileged, skinny TV host write a book about obesity in America? Okay, yes, but should she?

Mika Brzezinski, co-host of a popular MSNBC morning show and bestselling author, has lived with an eating disorder that has plagued her mentally and physically, but she’s looks great in a sleeveless size two dress. … So that makes it okay, right? No.

Diane Smith, Emmy-Award-Winning Producer and Journalist, has struggled with food and weight her entire life as well, but her struggle was evident on the outside weighing in at 250 pounds. … So that makes her a failure, right? No.

OBSESSED: AMERICA’S FOOD ADDICTION—AND MY OWN shares both Mika’s and Diane’s personal struggles to overcome their food obsessions and maintain a healthier lifestyle. The juxtaposed stories of an obese person and a skinny person really played to the point of food obsession well. To know that many of Mika’s stories were MY OWN stories, and her feelings were my feelings, really surprised me.


Fat people often think skinny people have no idea how they struggle against food every day. Truth is: many skinny people struggle more with food obsession than their overweight counterparts.

The bottom line is: I couldn’t put the book down. From the opening page where Mika writes, “How does a person who is not overweight write about her lifelong obsession with overeating without sounding like a narcissistic, woe-is-me skinny girl with an overinflated image … you can’t. No matter what you say or how you say it, you’re going to sound like a privileged skinny bitch with food issues. Oh yeah, and a TV show. And a woman who was born into a wonderful, prominent family and has a blessed life.” … to the final pages where Mika writes, “I thought all this research and writing would help Diane get her life back on track. But she made me realize that I had lot more work to do on myself … I am more self-aware and less self-righteous when the topic turns to eating.” … I was enthralled by the story, by the facts, and by the testimonials.

I dog-eared more pages than I should have, but there were so many things that I wanted to share, address, and debate in not only my review but also in my conversations with other people about the topic, I just couldn’t stop myself from marking the passages in the book that moved me.

The most important pages, that brought me to tears, were the ones about what you should and should not say to your daughters about food related issues. I love my children, and I have struggled to teach them better eating and exercising habits than I’ve practiced myself. I never wanted them to grow up with the same weight and body image issues I’ve had. But as I read Mika’s passages where she expressed her concerns about passing her food obsessions on to her daughter, I shook my head and thought, “Mika, you’re fooling yourself if you don’t realize they are watching your behavior more than listening to your advice.” Then Mika went on to write, “Carlie and I … both weighed ourselves. … [and Carlie said to me] ‘You have an eating disorder, so that’s why you weigh less than me.’” (page 230). I started to cry! I chastised myself for judging Mika unfairly. Truth of the matter is, all of our children are smarter and more intuitive than we give them credit for. My children know the truth about my eating habits. So do yours.

The fact is: She’s written a great book here, and if it’s read and discussed by people it can serve as a useful tool in our society. This would be an excellent choice for a discussion at book club, mothers’ groups, parenting classes, nutrition classes, weight-loss programs, school health classes, and more.

Here are the reasons I gave the book four stars instead of five:


1.       It seemed to me that Diane Smith had contributed enough content to the book to be given credit as a coauthor rather than just a collaborator.


3.       There was a concluding chapter by Mika, but no concluding thoughts from Diane. This was my main disappointment with the book. I wanted to know how Diane felt at the end of the journey.


4.       Since this was a book about body image and appearance, I would have enjoyed a photo section in the center of the book featuring the people interviewed.

Regardless of the above list, I highly recommend this book to all women.
What are you reading right now?