If you love movies that are well written, well acted, and a freaking rollercoaster ride of emotions ... you simply must go and see Once I Was a Beehive.

It's a movie about a sixteen-year-old girl, Lane, who must deal with the death of her father, and she is forced to deal with it sooner than she wants when her mother decides to remarry. While her mom and new step-dad are off on their honeymoon, Lane stays with members of the extended step-family and through a turn of events, she ends up at a summer camp. There she meets a wide range of characters including Phoebe (who deals daily with her own anxiety disorder) and camp leaders (who are a bit overzealous). As Lane begins to connect with the girls at camp, she learns lessons that help her find her own path to recovery.

Now if you have ever attended summer camp -- whether it was a church camp, girl scout camp, or a school sponsored camp -- you know there is a magic that happens during that time at camp where growth and bonding occurs. This movie brings out those cherished moments.

I usually don't like sitting in a sold-out theater, but this time, it added to the experience. The entire audience laughed and cried and gasped together. Honestly, I have not heard that much crying since I watched The Notebook in the theater.

Once I Was a Beehive is a terrific rollercoaster of emotions. 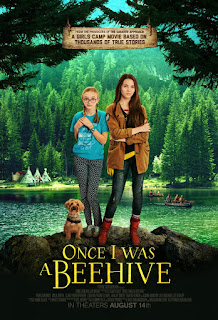 I had the pleasure of receiving an invitation to attend an exclusive screening of the movie in Boise, Idaho, and it was a great experience. Maclain Nelson (the director) and Clare Niederpruem (who played Bree in the movie) answered questions after the screening, and it was very interesting to learn more about the process. Clare explained that the bear in the movie is a trained bear that has appeared in numerous films, and he was the highest paid actor for this film! Clare said they were actually in the scene with the bear when they curled up and played dead. No green screens there. The bear was very close to them. They also shared with us that the ark in the film was intended to float, but when it would not float, they rewrote the script to accommodate that little obstacle.

Yes, the movie does have religion in it, including a lot of Bible references about Noah and Isaiah, but it is a church girls' camp. The fact that the main character is not sure what she believes about religion makes the movie very accessible to people of all beliefs.

Frankly, the movie is not about religion. The movie is about reaching out to the people around you, making connections with them, and then having gut-busting fun with them.

My husband and I attended the movie with another couple, and we all loved it.

Email ThisBlogThis!Share to TwitterShare to FacebookShare to Pinterest
Labels: Clare Niederpruem, Maclain Nelson, movie reviews, Once I Was a Beehive