I was thrilled to have the opportunity to read and review Joshua David Bellin's newest book, Ecosystem. I've been a fan of his for years, and his latest fictional adventure does not disappoint! Scroll on down for my review and for a chance to win this terrific book. 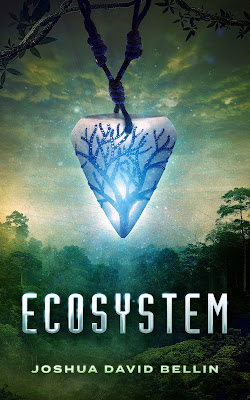 Description from the publisher:

Seventeen-year-old Sarah is a Sensor, gifted with the ability to survive within the sentient Ecosystem that swept away human civilization centuries ago. While the remnants of humankind huddle in small villages of stone, Sarah uses her psychic connection to the Ecosystem to travel freely in the wild in search of food, water, and fuel. Sarah doesn’t fear the Ecosystem—but she hates it for killing her mother when Sarah was a child. When she hunts, she hunts not only for her people’s sustenance but for revenge.

Then Miriam, an apprentice Sensor, is lost in the Ecosystem, and Sarah sets out to rescue her. Joining Sarah is Miriam’s beloved, Isaac, a boy who claims to possess knowledge of the Ecosystem that will help their people survive. The harrowing journey to find the missing apprentice takes Sarah and Isaac into the Ecosystem’s deadliest places. And it takes Sarah into the unexplored territory of her own heart, where she discovers feelings that threaten to tear her—and her society—apart.

A thrilling fantasy adventure from the author of Freefall and the Survival Colony series, Ecosystem is the first book in a YA trilogy that includes The Devouring Land (2019) and House of Earth, House of Stone (2020). 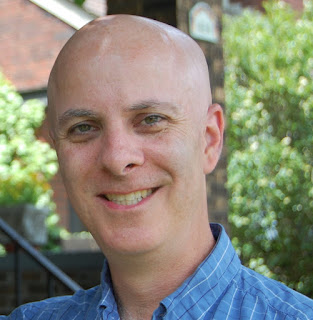 Joshua David Bellin has been writing novels since he was eight years old (though the first few were admittedly very short). A college teacher by day, he is the author of three science fiction novels for teens and adults: the two-part Survival Colony series (Survival Colony 9 and Scavenger of Souls) and the deep-space adventure Freefall. His new book, the YA fantasy Ecosystem, released on April 22, 2018 (Earth Day). Josh loves to read, watch movies, and spend time in Nature with his kids. Oh, yeah, and he likes monsters. Really scary monsters.

My review of Ecosystem:

If you’re a huge fan of Joshua David Bellin, like I am, be warned that his newest book, Ecosystem, utilizes a significantly different narrative voice than the ones found in his previous novels, in large part because his previous books were science fiction and Ecosystem is more in the fantasy realm. Consequently, I recommend you cleanse your palate, clear your mind, and control your phobias before jumping into the jungle underbrush of Ecosystem. Trust me, you won’t be disappointed.

Ecosystem by Joshua David Bellin is an exciting escapade that delves into the notion of rules being rules because they’ve been passed down from generation to generation and teens pushing beyond their societal boundaries because they believe there’s a better way, which conjures in my mind notions of both The Giver by Lois Lowry and The Maze Runner by James Dashner.

Once I settled into the narrative voice of Ecosystem, I really enjoyed the storytelling and word choices. Instead of calling plants commonplace names such as primrose and wisteria, Bellin gave them menacing names like poisonrose and histeria. Instead of sycamore tree, it was sickenmore tree. As much as I love going camping every summer in my beloved state of Idaho, I would not want to take a day trip through Bellin’s Ecosystem! Yikes. Everything, it appeared, was out to kill the humans in Bellin’s fictional forest.

Bellin paints detailed imagery throughout the story, for example:

“I stand amid trees many hundreds of years old, their branches trailing lattices of moss, their bark carved into antic shapes like deeply wrinkled faces. Ferns with spatulate leaves form beds between tree-trunks, while a few downed giants wave earth-brown roots to the sky.”

Even though Bellin’s writing is beautiful, the reader (and characters within the story) must remember, “The Ecosystem is a parade of horrors, and anyone who forgets that is asking for her own death.”

“I slice the monster from blunt head to a third of the way down its back. It has no throat to make a sound, but its body buckles in agony, the viscous liquid that passes for its blood spraying me as it writhes across the floor. Not dead, though. Urthwyrms can suffer far more damage than that and live. Cut them in two, and you’ve only doubled your enemy’s strength.”

A few other favorite lines from the book:

“The forest didn’t need to lift a finger to kill me. All it had to do was sit back and watch me kill myself.”

While Ecosystem by Joshua David Bellin is great romp through the forest following Sarah’s compelling quest, the story also takes a fascinating look at relationships, responsibilities, and expectations between people, nature, and society.

Ecosystem is the first in a new series by Bellin. It reads as a standalone book, with the major plot threads tied up at the end, but Bellin left a few unanswered questions to tease my curiosity into wanting to read the next book as soon as possible.

(By the way, as much as I love a scary story, I’m glad I read this in the comfort of my home instead of while camping in the boonies, where there are creepy crawlers and twisted trees and swampy marshes.)

Read what others think of this new book and read an excerpt by checking out the Ecosystem Blog Tour. 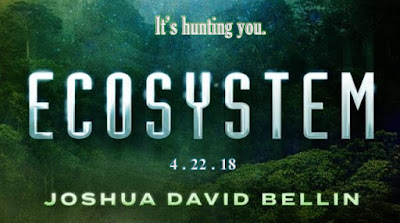 Enter for a chance to win a copy of Ecosystem: