Book Review: THE DARK BENEATH THE ICE by Amelinda Bérubé

Oh, I love a creepy, thrilling, ghost story, and I was excited to be given the opportunity to read an early copy of THE DARK BENEATH THE ICE by Amelinda Bérubé. Scroll on down for my full review! 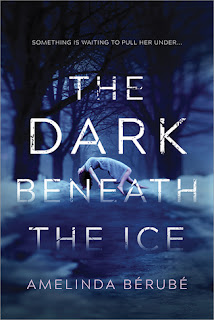 The Dark Beneath the Ice
by Amelinda Bérubé

Description from the Publisher:
Black Swan meets Paranormal Activity in this compelling ghost story about a former dancer whose grip on reality slips when she begins to think a dark entity is stalking her.

Something is wrong with Marianne.

It's not just that her parents have finally split up. Or that life hasn't been the same since she quit dancing. Or even that her mother has checked herself into the hospital.

She's losing time. Doing things she would never do. And objects around her seem to break whenever she comes close. Something is after her. And the only one who seems to believe her is the daughter of a local psychic.

But their first attempt at an exorcism calls down the full force of the thing's rage. It demands Marianne give back what she stole. Whatever is haunting her, it wants everything she has―everything it's convinced she stole. Marianne must uncover the truth that lies beneath it all before the nightmare can take what it thinks it's owed, leaving Marianne trapped in the darkness of the other side.

About the Author:
From Amelinda Bérubé's Goodreads Page, it reads, "I write about ghosts and monsters and other things that go bump in the night. My books tend to include a liberal sprinkling of weird Canadiana and the occasional zombie metaphor. I am an eternal fangirl for YA and SFF, but any book that makes me laugh, makes me cry, or creeps me out will have my heart forever. My very favorites tend to have a thinky, supernatural flavor and don't explain too much. In my other lives I'm a public service editor, a mother of two, and a passionate gardener. I live in Ottawa, Canada, in a perpetual whirlwind of unfinished projects and cat hair."

Do you believe in demons? What exactly is a demon? I explore that topic more in this previous blog post of mine: Do Demons Really Exist? I mention demons, because THE DARK BENEATH THE ICE is a terrific, creepy story that poses many questions, one of which is: can a demon cause paranormal activity?

While the opening lyrical prose of this story was beautiful, it also left my mind swimming with confusion, but I trusted there was a purpose, which there was, thankfully.

THE DARK BENEATH THE ICE is a fun-filled ghost story that covers all the possibilities - the occult, religion, psychological imbalance, inner demons, and yes, even ghosts. However, if you don't like scary stories, the f-word, or girl-loves-girl stories, this one might not be for you.

If you like gasping aloud while reading, then dive into Amelinda Berube's fabulous debut novel.

The scariest element of this story was the examination of inner demons, because as a fully invested reader, you can't help but ask, "What parts of me have I been burying and denying? What would I be capable of if I truly accepted and loved myself? And on the flip-side, what am I capable of if I deny myself the love and acceptance I deserve despite my perceived shortcomings and flaws?"

We can't all be perfect ballerinas, but we can be the perfect individual we were created to be.

"It was quiet, but a comfortable quiet, a book-and-a-blanket quiet."

"We spent the second night on the beach watching a meteor shower. It was cloudless, moonless, the sky alive and infinite. Looking up into it made gravity seem precarious, like you could lose your grip on the world and tumble into the air."


[I received an early copy of this book for free from Sourcebooks Fire in exchange for an honest review. This is no way influenced my opinion of the book.]