Book Review: HOW TO FRACTURE A FAIRY TALE by Jane Yolen

When offered the chance to read an early copy of Jane Yolen's collection of fractured fairy tales, I jumped at the opportunity! Scroll down to read my full review. 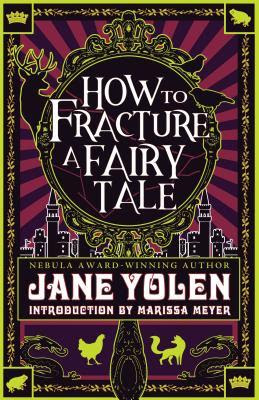 Fantasy legend Jane Yolen presents a wide-ranging offering of fractured fairy tales. Yolen fractures the classics to reveal their crystalline secrets, holding them to the light and presenting them entirely transformed; where a spinner of straw into gold becomes a money-changer and the big bad wolf retires to a nursing home. Rediscover the tales you once knew, rewritten and refined for the world we now live in―or a much better version of it.

Jane Yolen is a novelist, poet, fantasist, journalist, songwriter, storyteller, folklorist, and children’s book author who has written more than three hundred books. Her accolades include the Caldecott Medal, two Nebula Awards, the World Fantasy Award, three Mythopoeic Awards, the Kerlan Award, two Christopher Awards, and six honorary doctorate degrees from colleges and universities in Massachusetts and New Hampshire. Born and raised in New York City, the mother of three and the grandmother of six, Yolen lives in Massachusetts and St. Andrews, Scotland.

The title alone caught my attention, and then when I saw that this book was written by Jane Yolen, I knew I had to read it!

In an introduction by Marissa Meyer, she writes, "There is a history of tales told and retold that spans centuries--even millennia--and reaches to all corners of the globe."

How to Fracture a Fairy Tale, by Jane Yolen, is a collection of short stories and poems based on familiar fairy tales--but altered in fun, creepy, and imaginative ways. Yolen explains, "A fracture is a break . . . [it] can hurt like a sprain or reveal like a geode being split apart to show the jewels within."

Yolen takes well-known fairy tales and splits them apart, sometimes leaving them still quite familiar and other times shining a light from an unfamiliar angle to reveal new truths and possibilities.

This collection is a perfect choice to read when you have only a few minutes at a time to devote to the book. Read it while you're waiting at the doctor's office, or waiting in line to pick up your kids, or waiting anywhere!

"I felled her with a single blow of the fry pan."

"Of course he had the big bran-muffin eyes and the sled-jump nose and the gingko-leaf ears that identify a troll immediately."

"Instead she floated like a swan and the river bore her on."


[I received an early copy of this book from the publisher in exchange for an honest review. This in no way influenced my opinion.]