If you've never read Joshua Bellin's books - what are you waiting for? A sale? Okay - here you go! Bellin's Ecosystem trilogy is on sale from May 2 through May 6, with each of the three Kindle e-books discounted from $2.99 to $0.99.

I'm a big Bellin fan, and I'm happy to recommend this series to you. 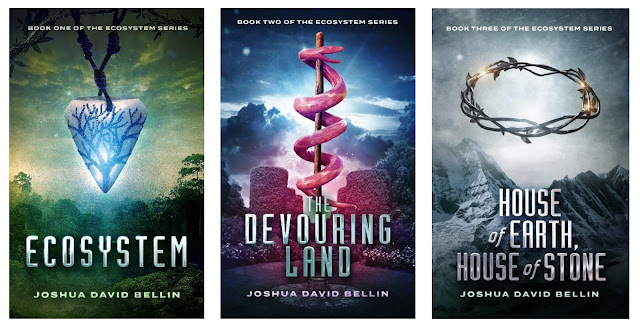 In a far distant future, Earth's environment has mutated into the Ecosystem, a collective sentience that has pushed human beings to the brink of extinction. Only those individuals who are born with the psychic power known as the Sense can negotiate the Ecosystem's deadly maze in search of the food, water, and fuel their people need to survive. When Sarah, a seventeen-year-old Sensor with a grudge against the Ecosystem, sets out to avenge her mother's death, she learns more about the Ecosystem--and about herself--than she ever bargained for.

Miriam, an apprentice Sensor, is lost in the Ecosystem, and Sarah sets out to rescue her. Joining Sarah is Isaac, a boy who claims to possess knowledge of the Ecosystem that will help their people survive. The harrowing journey to find the missing apprentice takes Sarah and Isaac into the Ecosystem's deadliest places. And it takes Sarah into the unexplored territory of her own heart, where she discovers feelings that threaten to tear her--and her society--apart.

When Sarah’s village is overrun by monstrous creatures from the Ecosystem, she shepherds the survivors into the forest surrounding the village. Her own Sense badly damaged in an earlier attack, she must fight through a host of new threats in hopes of discovering the place where her mother was born, rumored to be home to a community of healers. But the City of the Queens is haunted by a dark secret of its own, and Sarah will have to learn the truth of her lineage in order to save the people she loves and protect the world she knows.

The City of the Queens is under attack. Sarah is forced to flee into the treacherous mountains to the far north, where she hopes to gain allies to contest the power that assails the city. But to wage this final battle, Sarah will have to overcome an ancient curse that threatens not only the survival of her people but the existence of the Ecosystem itself. And she will have to decide whether to save Isaac, the boy she loves, at the cost of losing everything else she holds dear.