Oh, boy. Dean Koontz wrote a satisfying finale to his Jane Hawk series! Scroll on down for my complete review. 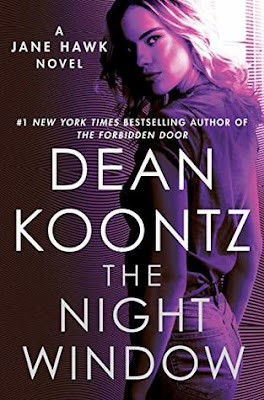 Description from the Publisher
A visionary young filmmaker hunted for sport across a vast Colorado ranch by the celebrated billionaire at the heart of a monstrous cabal . . .

A brilliant computer hacker slipping through top-secret databases a whisper ahead of security trackers, gathering the facts to fight the all-powerful perpetrators of mass murder . . .

A pair of brutal operators, methodically shadowing their targets with every cutting-edge tool in the arsenal of today’s surveillance state . . .

A sequence of quiet heroes—everyday citizens—stepping up, stepping forward, intent on countering the advancing darkness . . .

A Vegas mob boss teamed with a homicidal sociopath, circling a beloved boy and his protectors, aiming to secure him as leverage against his fugitive mother . . .

And that fugitive mother herself, ex-agent Jane Hawk, closing in on the malevolent architects of ruin she has stalked as they stalk her, prepared to sacrifice herself to finally bring them down.

These are the people and circumstances of The Night Window, the thrilling new novel in Dean Koontz’s acclaimed Jane Hawk series. Replete—and then some—with the ingenious twists, the spellbinding action, the resonant themes, the sheer heart that have characterized Jane’s journey from the start, The Night Window follows its extraordinary heroine to her long-sought objective, in a stunning, unforgettable finale.

“The spectacular finale to Jane’s story . . . will hit series fans with all the impact of a carefully calibrated hammer blow.”—Booklist (starred review)

About the Author
Dean Koontz, the author of many #1 New York Times bestsellers, lives in Southern California with his wife, Gerda, their golden retriever, Elsa, and the enduring spirits of their goldens, Trixie and Anna.

THE NIGHT WINDOW by Dean Koontz provides a mesmerizing and satisfying end to the Jane Hawk series.

Of the five book series, there were a couple of installments that left me less than satisfied as Jane Hawk's point of view became less and less of a focal point. So, understandably, I was concerned going into this finale that I would be disappointed with the series' end. Thankfully, Koontz wrapped up the series wonderfully by giving less time to the evil Arcadians' warped minds and more time to the heroes of the story. And there were multiple heroes. Jane did not save the day by herself. Don't worry, I won't spoil the story for you. I do wish Jane had managed to find a way to save the day on her own, but she needed help, and it was terrific to see good people band together to fight off the bad people. And there were plenty of bad people - practicing "random acts of cruelty," misogyny, sexual impropriety, murder, and so much more. (Yuck.) But I love how Koontz makes sure that in his books, good wins over evil in the end.

A few of my favorite lines from the book:

"Hollister turns in his chair to watch the first snowflakes, the size of quarters and half dollars, spiraling out of the low clouds like some jackpot disgorged by a celestial slot machine."

"The wealth of stars conjured in her imagination an evil, glimmering constellation of junction points in a nanoweb secreted in the darkness of a skull, and thinking of the mission ahead sent cold tremors through her."

[I received a free advanced copy from the publisher via Net Galley, which in no way influenced my opinion.]