Oh, I love thrillers, and I love novels written for the young adult audience! So when I was offered a copy of DAY ZERO to read, I jumped at the opportunity! Scroll down for my complete review. 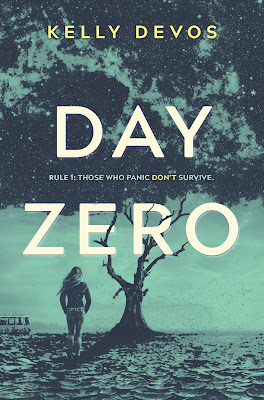 
Description from the Publisher
Don’t miss the exhilarating new novel from the author of Fat Girl on a Plane, featuring a fierce, bold heroine who will fight for her family and do whatever it takes to survive. Fans of Susan Beth Pfeffer’s Life As We Knew It series and Rick Yancey’s The 5th Wave series will
cheer for this fast-paced, near-future thrill ride. If you’re going through hell…keep going. Seventeen-year-old coder Jinx Marshall grew up spending weekends drilling with her paranoid dad for a doomsday she’s sure will never come. She’s an expert on self-heating meal rations, Krav Maga, and extracting water from a barrel cactus. Now that her parents are divorced, she’s ready to relax. Her big plans include making it to level 99 in her favorite MMORPG and spending the weekend with her new hunky stepbrother, Toby. But all that disaster training comes in handy when an explosion traps her in a burning building. Stuck leading her headstrong stepsister, MacKenna, and her precocious little brother, Charles, to safety, Jinx gets them out alive only to discover the explosion is part of a pattern of violence erupting all over the country. Even worse, Jinx’s dad stands accused of triggering the chaos. In a desperate attempt to evade paramilitary forces and vigilantes, Jinx and her siblings find Toby and make a break for Mexico. With seemingly the whole world working against them, they’ve got to get along and search for the truth about the attacks—and about each other. But if they can survive, will there be anything left worth surviving for?


About the Author
KELLY DEVOS is from Gilbert, Arizona, where she lives with her high school sweetheart husband, amazing teen daughter and superhero dog, Cocoa. She holds a B.A. in Creative Writing from Arizona State University. When not reading or writing, Kelly can typically be found with a mocha in hand, bingeing the latest TV shows and adding to her ever-growing sticker collection. Her debut novel, Fat Girl on a Plane, named one of the "50 Best Summer Reads of All Time" by Reader's Digest magazine, is available now from HarperCollins. Kelly's work has been featured in the New York Times as well as on Salon, Vulture and Bustle.

At first, I was concerned that the story was going to sink too heavily into a political commentary, but once the action started, deVos deftly balanced out the politics with the additional plot elements. And honestly, such is the nature of a political thriller: a story involving political corruption, terrorism, and warfare while two opposing forces fight for control of the system. The tricky part here was the story is targeted at the young adult audience. So while the main character was a teenage girl, many of the decisions and resolutions in the plot line were made by adults.

The beginning of the story contained quite a bit of set-up, but around the twenty-percent mark, the story started moving at a nice clip and constant adventure and action filled the pages.

I love a story that surprises me, and DAY ZERO offered plenty of plot twists—clear up to the final pages—keeping me engaged and wondering what would happen next.

Strong writing stood out in the action scenes while shorter sentences spattered the slower scenes, such as: “I force down mouthfuls of cheese pizza. The slice is cold and clammy. The cheese tastes like plastic.”

There were many passages of writing that I absolutely loved. Some of my favorites included:

“Next to the register, a stack of plastic dancing turkey figurines shake in unison from side to side. This is going to be the last thing I see. My last moments on earth will be spent thinking Gobble till you wobble.”

“A tall, grimly thin, gray-haired man emerges from a small room at the back. His hair shoots out in every direction, and he’s dressed in overalls so dirty that I was probably a small child the last time anyone washed them.”

“Everyone has a mother.”

“There’s no upside to being the daughter of the devil.”

“She thinks if she doesn’t pick any battles, there’s no way she can lose.”

“A zero-day exploit is a piece of malware that’s been hanging around for a while. Day Zero is the moment when the user becomes aware that they’re screwed. It’s usually the start of something. Something terrible.”

Final verdict: If you enjoy action, adventure, doomsday plots, and/or political thrillers, DAY ZERO by Kelly deVos is a book for you!

[I received this book for free from the publisher via Net Galley. This did not influence my opinion.]