Months ago, I was asked to read an early copy and write a blurb for the debut novel of Lani Forbes, THE SEVENTH SUN. I was honored, and it's so fun to see part of my review published on the back of the audio book edition: 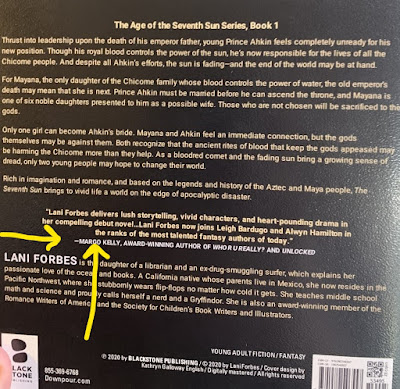 Additionally, Tuesday, 2/18/20, at 7pm in Boise, Idaho, I will have the pleasure of interviewing Lani at the launch party for her book. If you're in town, join us: 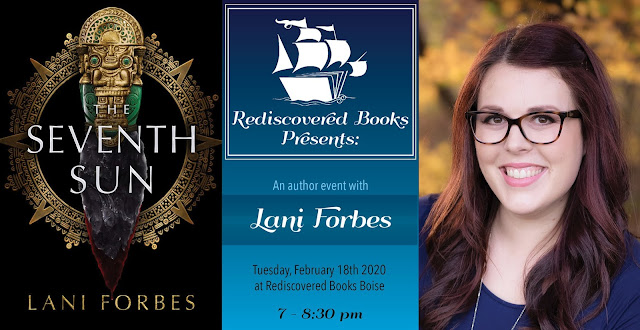 Scroll on down for my complete review of Lani's novel, but here is additional information about her book: 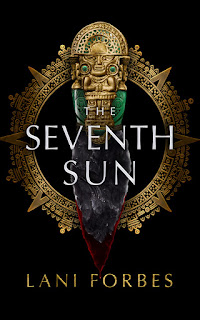 
Description from the Publisher:
Thrust into leadership upon the death of his emperor father, young Prince Ahkin feels completely unready for his new position. Though his royal blood controls the power of the sun, he's now responsible for the lives of all the Chicome people. And despite all Ahkin's efforts, the sun is fading--and the end of the world may be at hand.

For Mayana, the only daughter of the Chicome family whose blood controls the power of water, the old emperor's death may mean that she is next. Prince Ahkin must be married before he can ascend the throne, and Mayana is one of six noble daughters presented to him as a possible wife. Those who are not chosen will be sacrificed to the gods.

Only one girl can become Ahkin's bride. Mayana and Ahkin feel an immediate connection, but the gods themselves may be against them. Both recognize that the ancient rites of blood that keep the gods appeased may be harming the Chicome more than they help. As a bloodred comet and the fading sun bring a growing sense of dread, only two young people may hope to change their world.

Rich in imagination and romance, and based on the legends and history of the Aztec and Maya people, The Seventh Sun brings to vivid life a world on the edge of apocalyptic disaster.

About the Author:
Lani Forbes is the daughter of a librarian and an ex-drug smuggling surfer, which explains her passionate love of the ocean and books. A California native whose parents live in Mexico, she now resides in the Pacific Northwest where she stubbornly wears flip flops no matter how cold it gets. She teaches middle school math and science and proudly calls herself a nerd and Gryffindor. She is also an award-winning member of Romance Writers of America and the Society for Children’s Book Writers and Illustrators.

With THE SEVENTH SUN, Lani Forbes joins Leigh Bardugo and Alwyn Hamilton in the ranks of the most talented fantasy authors of today.

Ancient civilizations, mythologies, head dresses, jade pendants, noble families, obsidian daggers – whoa boy – Lani Forbes’s debut novel, THE SEVENTH SUN, kept me glued to the page as I became fully immersed in the rich cultural experience of the Chicome people. With two main characters: Ahkin, a devout young prince who is expected to become emperor and lead his people, and Mayana, a heretic who could win Ahkin’s heart and become the next empress, THE SEVENTH SUN is full of conflict, emotion, and drama that will keep readers turning pages late into the night to find out what will happen next.

Forbes’s amazing writing enveloped me in the world of the story. Here are some of my favorite passages:

“Her heart drummed a rhythm so deep it pounded inside her ears, making her wonder how many beats it had left. Would they cut it from her chest and burn it on an altar? She shuddered, pressing her hand against it as thought she could shield it from such a fate.”

“Love does not hold grudges or demand payment.”

“Why had her father taught her every important ritual and rule under the sun but not how to hold the hand of a prince?”

“Human finger bones rattled from their shields and their quivers were filled not with arrows, but with sharpened bones from enemy arms and legs.”

I am a fan of series, but my favorites are ones where each book has a completed plot and the next book continues with the same awesome characters conquering a new plot. So be warned, THE SEVENTH SUN is the first book in a trilogy with a cliff hanger at the end. But hey, let’s be real, if that is my only criticism, that’s actually a huge compliment!

THE SEVENTH SUN, by far, is the best book I’ve read in ages, and I am so excited to continue reading the series.

[I received an early copy of this novel for free in exchange for an honest review. This in no way influenced my opinion of the book.]