When I was invited to read and review Suzanne Kamata's latest middle-grade book, I was so excited! She's a terrific author, and this book exceeded my expectations. Scroll down for my complete review. 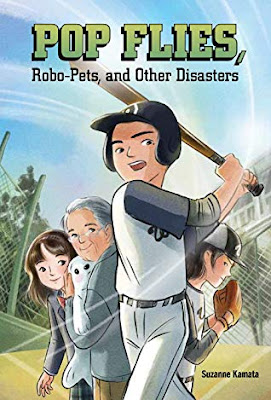 
Description from the Publisher:
Thirteen-year-old Satoshi Matsumoto spent the last three years living in Atlanta where he was the star of his middle-school baseball team―a slugger with pro potential, according to his coach. Now that his father's work in the US has come to an end, he's moved back to his hometown in rural Japan. Living abroad has changed him, and now his old friends in Japan are suspicious of his new foreign ways. Even worse, his childhood foe Shintaro, whose dad has ties to gangsters, is in his homeroom. After he joins his new school's baseball team, Satoshi has a chance to be a hero until he makes a major-league error.

"A heart-warming story about a baseball player who learns that teamwork is much more important than being the star of the team. I loved the family dynamics and depiction of life, and especially baseball, in Japan."―Shauna Holyoak, author of Kazu Jones and the Denver Dognappers (Hyperion, 2019)

"A story set in Japan rich in details only Kamata, an insider, could share. With ease and respect, she weaves the pressures, agonies, and loyalties of Satoshi's life at home, at school and on a junior high baseball team with the practices and traditions of the game played in Japan. I am a big fan of this middle-grade homerun!"―Annie Donwerth Chikamatsu, award-winning author of Somewhere Among (Atheneum/Caitlyn Dlouhy Books, 2017)

About the Author & Illustrator:
Award-winning author Suzanne Kamata was born and raised in the United States, but has lived in Japan for over half of her life. Suzanne raised two kids and now lives with her husband in Aizumi, Japan. Tracy Nishimura Bishop is an illustrator working in San Jose, CA. She grew up in Japan and got hooked on drawing when she won an art contest in Kindergarten.

Suzanne Kamata knocked it out of the park with her middle-grade novel, Pop Flies, Robo-Pets, and Other Disasters!

Whether you live in the United States, Japan, or elsewhere in the world, Pop Flies by Kamata allows insight into two cultures by comparing and contrasting many moments throughout the story via the lens of a middle-grade boy. Even the act of changing from outdoor shoes to indoor shoes and to bathroom slippers gives awareness to variances between the USA and Japan, often making me, and other readers, pause to ask the question, "Why don't we do that?" But then also the question, "Why do they do that?" Such as when Kamata writes, "I remember how my classmates in Atlanta made fun of me when I peeled my grapes before eating them ... I never knew what I was doing to make people laugh." The story also gives examples of similarities between the two countries, not just baseball but also malls, Rock, Paper, Scissors, bullying, and teamwork.

Reading Pop Flies together as a class would allow middle-grade students to discuss not only cultural differences but also household and friendship differences, which would expand their understanding and compassion for classmates.

This story was a breath of fresh air. In addition to the cultural comparisons and explorations, I thoroughly enjoyed the various dynamics of the characters' families, including the well-described use of sign language. And whether intended by the author or not, I was struck by the parallels between sign language gestures, cultural gestures, and friendship gestures. All have great meaning. "A piece of fruit is hardly enough to thank them ... Still, gestures count."

The artwork is engaging and captures pivotal moments of the story. For that reason, I would highly recommend purchasing this book in the print form to best appreciate the artwork.

"I churn my legs like mad, trying to make up for lost time, but I'm still a hundred feet away from the front door when I hear the chime for first period."

"The guys from Ikeda are wiping at their eyes and noses. I'd almost forgotten about the crying. In America, if you cry after losing a game, you're a total wuss. In Japan, crying after a loss is almost required."

"Now that the rain has lifted, the heat and humidity of summer have moved in. Even this early in the morning it feels as if a dragon is breathing down my back."

Pop Flies, Robo-Pets, and Other Disasters by Suzanne Kamata is a must read and must purchase for anyone who enjoys baseball, middle-grade novels, Japan, cultural exploration, and reading in general.

[I received a free copy of this book from the publisher via Net Galley in exchange for an honest review. This in no way influenced my opinion.]