Charity Bradford is hosting a blogfest! Check it out: charitywrites.blogspot.com 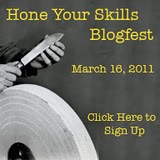 The challenge is to post a piece of flash fiction (a story told in less than 1000 words) and then critique the other participants. So, feel free to be brutual, but make it constructive. And, maybe just ... enjoy!

Michael’s mother carried her handbag in the crook of her arm and tugged Michael along, gripping his ear with her hand. Michael looked up at her as she strode out of the principal’s office. She smiled and greeted each person they passed in the hall. He stumbled when his oversized sneaker snagged the tattered hem of his pants leg, but his mother kept him upright with her firm grip on his ear. She continued her smooth stride out the elementary school’s main door, wearing her platform shoes and short tight skirt. Her bleached blond hair glistened in the humid Georgia sunshine, but not a drop of perspiration escaped her tight face.

She marched him to the car, parked cockeyed, and released Michael’s ear. He stood motionless as she opened the back door to the sedan and glanced around the parking lot. Michael bent to get into the car, and she slapped him hard alongside his head.

"STUPID! How dare you shame me,” she said.

Michael grabbed his face where the lingering sting caused the blood to throb inside his head. Without a word, he finished getting into the car. She slammed his door. Michael watched as she situated herself in the front seat. She adjusted the rearview mirror with her slender fingers. His mother made momentary eye contact with him, but he looked away.

She drove the car out of the parking lot and asked, “What were you thinking?”

Michael hesitated. He knew if he gave the wrong answer, he’d pay for it later. He said nothing, but replayed the incident in his mind.

Sally, not the prettiest girl in his fifth grade class, wore her brown hair long and straight. Her clothes were cheap and out of style, much like Michael’s. That’s why he thought he stood a chance with her. He needed a friend. Sally never volunteered answers in class. She seemed shy, perfect. However, when he approached her at lunch time and asked if he could sit and eat with her, she laughed out loud. Too loudly. She drew the attention of the other kids. They all turned and watched.

She spoke to Michael in full southern drawl. “Well, bless your lil’ heart. Meager misfit Michael wants to eat with lil’ ol’ me?” Sally stood, leaned close, and hollered, “Not today. Not in this life time. Not ever!” She turned so fast, her long hair flipped Michael in the face. The other kids burst out laughing.

Small statured and bone skinny, Michael lunged toward Sally and tackled her. With one hand, he gripped her hair. The other, he cocked backward and made a fist. Before he connected the blow, the principal pulled him off Sally. The principal hauled Michael to his office and immediately called his mother. For an hour, the principal lectured Michael about the virtue of women and how he should respect all women including the girls his own age. They faced each other across the large oak desk and waited for Michael’s mother to arrive.

“A man should never hit a woman,” the principal said and looked at Michael over the rims of his spectacles.

“Yes sir,” Michael said, but he could think of plenty of reasons to hit a woman.

His mother’s voice yanked him from his frustrated memories.

"Answer me,” she said. “Why’d you tackle that poor girl? Whatever possessed you?” His mother focused on him in the rear view mirror. This time, he held her gaze.

“They made fun of me,” Michael said.

“Why on earth would they make fun of you?”

Michael knew he should stay quiet. This couldn’t end well for him.

“Answer me,” she said again.

“They make fun of my clothes, my hair, everything about me, every day.”

“There’s nothing wrong with your clothes or your hair. Did you tell them that? Or did you just pounce on that poor thing? I swear, Michael, you over react to every little thing. You need to stand up for yourself and grow a backbone.”

Michael spoke without thinking. “How can I when I have to wear clothes from the thrift store? I look stupid. My sisters cut my hair. You spend all our money on yourself and them. You don’t spend any on me.” The air inside the car became frigid as Michael realized what he’d done. He stopped breathing for a moment, hoping that if he didn’t disturb even the air around him, maybe the moment would pass without punishment. His mother didn’t move a muscle. And then, suddenly, she swerved the car over to the side of the road, got out of the car, and opened Michael’s door.

“Get out!” she said. Michael did as he was told. She put one manicured finger in his face and said, “Don’t like your clothes? You don’t have to wear them.” And with strength he usually only felt behind her hits, she gripped the collar of his shirt, and ripped it right off him. “Take your pants off,” she yelled.

“No. Please. I’m sorry,” Michael said. He wished his father hadn’t left them. He knew his father wouldn’t let her treat him this way. And yet, he couldn’t blame his father for wanting to get away from this awful woman. Michael wished his father would’ve taken him away also. His mother continued yelling at him, telling him to take off his pants and his shoes. Tears streamed down Michael’s face as he refused. She slapped him.

“You can walk home,” she said and got back into the car. She hit the accelerator so hard gravel bit into Michael’s bare chest. He stood there and watched her drive away.

If you'd like to read other samples of my writing visit: http://www.margokelly.net