TRUTH BE TOLD by Larry King

Every once in awhile, I'm asked to read and review a book. When I received an email asking me if I was interested in TRUTH BE TOLD by Larry King, I hesitated. I do read non-fiction, but I've honestly never seen a single Larry King interview, ever. But I figured: why not? Below is a sampling of the writing, and on Monday, I will give you my opinion of the book. 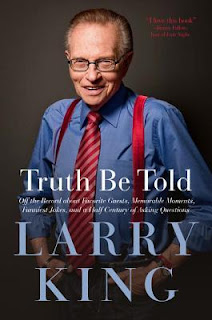 Truth Be Told
By Larry King,
Author of Truth Be Told: Off the Record about Favorite Guests, Memorable Moments, Funniest Jokes, and a Half Century of Asking Questions

I was speaking at The University of Texas -- Pan American not long ago and a student asked me a question that had never been asked of me in more than fifty years of broadcasting.

My first thought was Superman. Of course, there's the obvious question we'd all like answered:

Isn't it kind of incredible that after you took off your glasses no one recognized you as Clark Kent?

When I took off my glasses in front of the crowd at Pan American, they laughed. Hey, it's plain to see, I'm still Larry.

Dick Tracy is another fictional character I'd like to have had on Larry King Live. I would've asked him:


Over the years, people have asked about the subjects I always wished I had a chance to interview. Off the top of my head, there are three.

The first is Cuba's revolutionary leader, Fidel Castro. I went to Havana to try to arrange an interview with him a few years ago. I was shocked to find out how many people in Cuba knew who I was. As I walked down the street, people ran over, screaming: Senor Larry! Senor Larry!

Unfortunately, the interview couldn't be arranged. But here are a few of the questions I would've asked Fidel:


Then there's Prince Charles. To be quite honest, I've never been a big fan of our shows on British royalty. Certainly, the death of Princess Di was a major new story, and we covered it thoroughly. But it seemed to me we did way too many shows on the royals than were necessary. I understand the appetite among the public for all things royal. But Prince Charles is a figure of interest to me simply as a man. I'd like to ask him:


Then, there's the Pope. I would've liked to have interviewed any Pope. Once, the producers at Larry King Live got a maybe from John Paul II, but it never worked out. If I could sit with Pope Benedict XVI, I'd like to know:


Ordinarily, at 78 years old, I might look upon these questions with sadness that they were never asked. But now that ORA.tv, my new Internet company, is about to get started, they just may. You never know . . .

© 2012 Larry King, author of Truth Be Told: Off the Record about Favorite Guests, Memorable Moments, Funniest Jokes, and a Half Century of Asking Questions

Author Bio
Larry King, author of Truth Be Told: Off the Record about Favorite Guests, Memorable Moments, Funniest Jokes, and a Half Century of Asking Questions, was the host of CNN's Larry King Live, the first worldwide phone-in television talk show and the network's highest-rated program for twenty-five years. the Emmy-winning King also founded the Larry King Cardiac Foundation, which has raised millions of dollars and provided lifesaving cardiac procedures for nearly sixty needy children and adults.